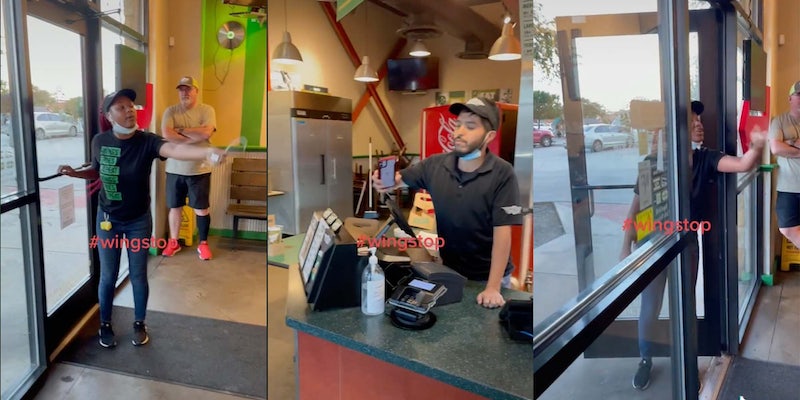 ‘The pain in her voice’: Wingstop employee gets fired amid screaming match in viral video

In a viral TikTok posted on Sunday by @421speed, a Wingstop manager fires an employee during a heated shouting match. Both are screaming and yelling, although it’s unclear what the argument is about.

“This shit not funny, you ruin it,” the employee yells while walking toward the exit door.

“Get out, get out. You’re fired, get out!” yells the manager as the employee stands in the doorway. “I don’t care. be mad. Be mad.” He calls her a “liar,” and after the employee exits, he asks the person taking a video of the interaction to “stop recording.”

Even though the video doesn’t provide context for the interaction, people in the comments section are on the employee’s side.

“The pain in her voice he guilty and did something,” wrote @desire0777.

Others referenced the difficulty of working minimum wage jobs: “The staff and management are horrible,” wrote @fidelvazquez21.

Similarly, @a_thousandwords wrote that both parties were “unprofessional.” “She [should’ve] just left and talked to a higher manager or the owner later,” the commenter wrote. “He needs to be fired for continuing” to yell at her, the user said.

Many even related to the video. User @tmirlove24 said they had been in the “same situation before,” and @sweetface_thatsme wrote, “Nobody ever defends Black women or even believe us.”

“I don’t even need the full story,” commented @homeschooled_promqueen. “Any time someone asks to stop being recorded 9/10 they’re in the wrong.”

The Daily Dot has reached out to Wingstop and @421speed.