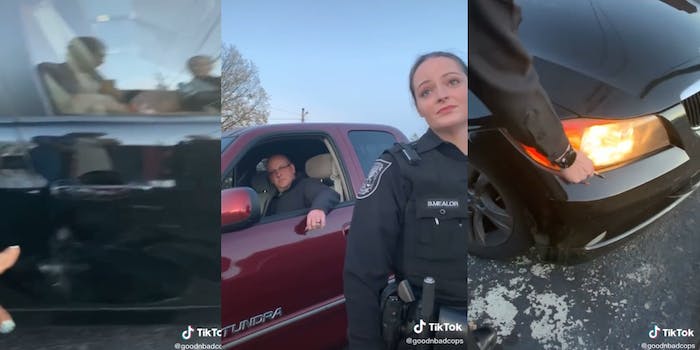 ‘You should be fair’: TikTok shows white cop gaslighting Black woman whose car was allegedly hit by off-duty officer

'That’s not fair to me for him to hit me and then you come and side with him.'

A viral video from 2019 has resurfaced and is garnering new attention from TikTokers. Many are calling for a white police officer—who is shown in the video gaslighting a Black woman whose car was hit—to be fired.

The video was reposted on July 20 by @goodnbadcops and shows a white female cop wearing the name tag “B. Mealor” assessing a scene in which two cars appear to be damaged in a parking lot in DeKalb County, Georgia. The parties involved include a white man, shown sitting in a parked Toyota Tundra, and a Black woman—who is filming—outside of her parked sedan.

The woman, clearly confused, asks the officer to clarify what she is talking about since there is no apparent damage to her front bumper. The officer reiterates, “that,” and keeps pointing to the bumper where no scratches or marks can be seen on the video.

“Ma’am, really? What are you talking about?” the woman asks the officer. “Be honest. What do you see? Tell me what you see.”

“I’m just asking if this damage was already there,” the officer responds, still pointing to the bumper.

“I don’t think you’re being fair…it’s not fair. Now, there is absolutely no damage here… you can clearly see there’s no damage on this [part of] car, but you can see—,” the woman points the camera at the truck. The officer interrupts, saying she saw the truck’s damage and the “damage” to the front of the woman’s car.

The woman argues that the officer could not have seen the alleged damage to her front bumper from where the officer was standing previously—behind the cars.

The two go back and forth about at what angle the officer was standing and how she could see what she claims is damage to the woman’s front bumper from behind her car. The woman continues to ask what damage she is talking about, as no marks can be seen on the bumper.

“There is no damage to be seen. You should be fair, regardless. Whether you are both police officers, that’s not fair to me for him to hit me and then you come and side with him,” she says to the officer, pointing the camera at the man in the truck as well. This is the first mention of the man possibly being connected to the police department.

“What I’m talking about is the angles,” the officer retorts before the video abruptly ends.

“She’s gaslighting this [woman] and the victim is being just as kind as she can despite the circumstances. Awful,” added @shoelover99.

“You would think cops would go above and beyond to DO BETTER, especially now. But instead they continue to show how shady they can be!” said @bekahdayyy.

“Cancel her ass she needs to be fired!!!! Asap like rn todayyyy with no pay,” commented @bigtapp4.

A day after the video was reposted on TikTok, the account @goodnbadcops posted an “update” on the situation, showing news anchors discussing the video and the outcome. The news clip is presumably from around the time of the original posting in 2019, but can no longer be found on 11alive.com.

“A woman accuses a DeKalb police officer for siding with an off-duty cop after a fender-bender; it was all recorded,” a female anchor says before showing a brief segment of the original video.

She continues: “DeKalb police say they are aware of that video and they have opened an investigation.”

“‘Opened an investigation’ is code for we got caught and we are trying to figure out how to cover it up 🙄,” commented @nerd_relish.

Some are calling for the off-duty officer to be held accountable as well.

“Both officers should be fired. ☺️ I hope everything goes in your favor!,” said @jassminesierra.

“The news station should be ashamed of themselves for not showing the lack of damage where the cop was pointing,” wrote Disney animator Dan Povenmire.

It is unclear if any action was taken by the police department in the following years. The Daily Dot reached out to the Dekalb County Police Department and 11Alive.com for comment.