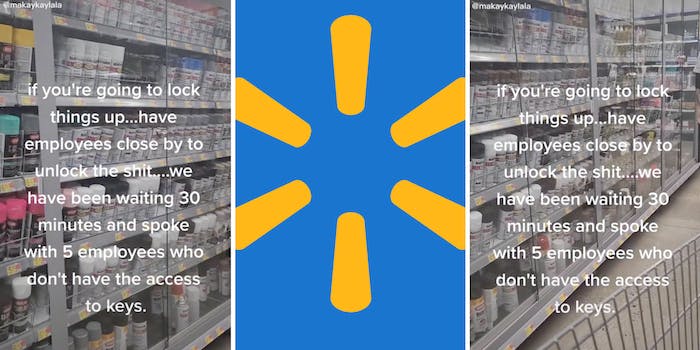 'We have been waiting for 30 minutes.'

A TikTok creator recorded her experience of not being able to get the products she wanted behind a locked display case for 30 minutes.

In the short clip posted to TikTok, the creator videotaped the spray paint aisle at the mega-market, showing all of them in a locked case. The text on the video says, “If you’re going to lock things up, have employees close by to unlock the shit.” She continued, “We have been waiting for 30 minutes and spoke with five employees who don’t have access to the keys.”

The video resonated with over 200 people who commented on the video, agreeing that the creator had the right to be annoyed. “Yep this locking stuff up like this is going to put Walmart out of business because they never have employees that can open the cases,” one person wrote. Another said, “Only 1 or 2 people have the keys not everyone gets one that’s [why] it takes forever.”

Other suggested other places to shop besides Walmart, “Your first mistake was going to Walmart,” a TikTok user commented, which the creator agreed with. Someone else wrote, “30 minutes for spray paint? lol go to Home Depot.”

“I refuse to shop where im considered a criminal until i prove my self innocent by showing my receipt exiting,” someone added. This comment was met with several sarcastic replies, but it touched on a sensitive, real problem when it comes to how these super stores police shoppers.

In 2020, Walmart said it would end its practice of locking Black beauty products in its glass cases. This had sparked a federal discrimination lawsuit that was ultimately dropped, according to the New York Times.

As for spray paint specifically, according to Art Radar Journal, Walmart locks it because the cans are often unsealed and it can create a particularly messy and expensive in-store cleanup.

The Daily Dot reached out to the creator via TikTok comment and Walmart via its press contact.