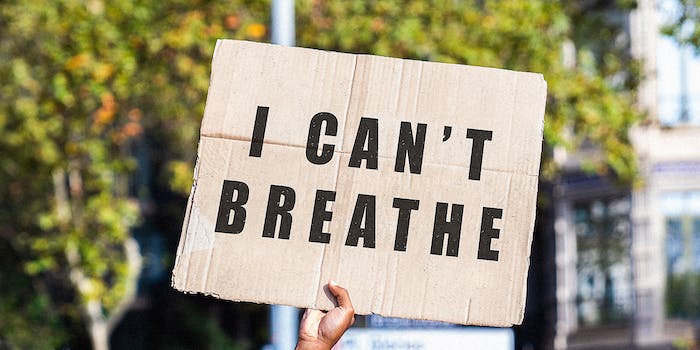 The leader of a local social justice group is calling for their expulsion.

Two high school students in South Carolina are being investigated after posting a TikTok mocking George Floyd’s death at the hands of a police officer.

The two white boys in the video pose as one presses his knee into the nick of the other boy, who’s lying on the ground. The caption says, “can’t breathe.”

A Black student at the school allegedly reported the video to Justin Hunt, president of social justice group Stand as One, after concerns that the school would not take action regarding the video, according to WCBD-TV.

The student and Hunt are requesting the boys’ expulsion from Berekely High School in Berkeley County, South Carolina, a predominantly white area where 69% of residents identify as white and 24.7% identify as Black or African American, according to the United States Census Bureau.

“I mean I don’t think they should be in this school with these children of color,” Hunt told WCBD-TV.

The Berkeley County School District said in a statement to WCBD-TV that the matter was under investigation and that officials would not comment on “student matters.”

A screenshot of the video taken by WCBD-TV shows the TikTok had 271 likes and 32 comments before it was deleted from the platform on Tuesday.

The boys’ recent video on TikTok is not the only one mocking Floyd’s death. Others have shared pictures and videos tagged “George Floyd Challenge.”

A viral TikTok exposed protesters at a rally for President Donald Trump in showing off their “All Lives Matter” flag while two men in the background pose in the same position as Floyd and Derek Chauvin, the officer who killed him.

Users were furious over the irony that they were mocking a man’s death while claiming to promote the idea that “all lives matter.”

“The fact that they would mock the killing just proves that all lives really don’t matter to them so not sure why they have that sign,” one user wrote.

“Seems like someone forgot to pickup their trash from that house,” another user commented.

The TikTok, which was originally posted by @balleralert in June, now has over 11,000 likes and 1,200 comments.

In January, Anthony Mague, executive producer at WRC-TV, tweeted a viral video of two Trump supporters mocking Floyd’s death on the steps of the National City Christian Church after a Black Lives Matter banner was hung up outside.

The clip, which has over 10 million views on Twitter, shows one man lying on the church steps while another approaches him from behind and places his knee on the man’s neck.