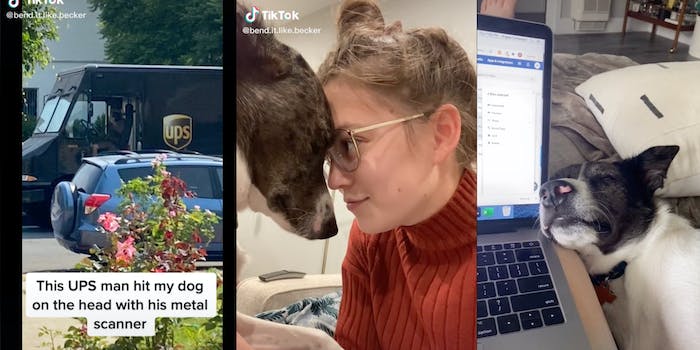 ‘Never should you hit an animal’: TikToker says UPS courier hit her dog in the head with his scanner (updated)

‘The dog did nothing to him.’

A TikToker claims in a now-viral video that a UPS courier hit her dog in the head with a metal scanner machine.

The user, @bend.it.like.becker, said the delivery driver came onto her property to deliver a package while her dog was in the front yard. She noted that her dog was not wearing a leash.

“My dog trotted up [to the driver] to say ‘hello’ as he would greet anyone … and instead he got smacked across the face,” she said. Her video detailing the incident has received over 517,000 views.

The user claims she asked the man whether he hit her dog; he began yelling at her, though, and berated her for not having her dog on a leash.

“The dog did nothing to him, but the man kept screaming at me,” she said.

Following the incident, she said, her dog is now vomiting and might have a concussion. “UPS won’t do anything; they won’t give me [the driver’s] information,” she said.

In a follow up video, she continues to explain the incident, saying that she had bent over to pick up her dog’s waste when the driver arrived. When she turned, she saw the driver hitting her pup. She says she didn’t yell at him, rather she tried to ask him about the dog calmly. She asserts that the driver could have handled the situation better and that there is never an excuse for hitting a dog.

“He had multiple options,” the TikToker said in the follow up. “He saw the dog when he came onto my property. He could have a) said something to me. ‘Restrain your dog.’ I would have grabbed my dog, no problem. I get it. People have had bad experiences. B) he could have said, ‘Hey ma’am, I’m gonna leave your package right here at the curb.’ Totally fine, would have been like ‘yeah thanks, I’ll go grab it.’ There are a million options. Walking onto my property and hitting my dog across the head is not any of those options. Never should you hit an animal.”

In the comments, some users were appalled by the man’s actions. Others, however, said that dog owners should always keep their pets inside if they’re waiting for deliveries.

“@UPS not OK,” someone else said. “You need to handle this better. So disappointed.”

Of course, not everyone was as sympathetic.

“You have to realize people don’t know your animals, they get bit all the time,” another said. “Keep your dog inside next time if you’re expecting someone.”

Update 5:58 pm CT Aug. 22: A spokesperson for the Daily Dot said that the company has reached out to the TikToker to apologize and request more information about the incident.