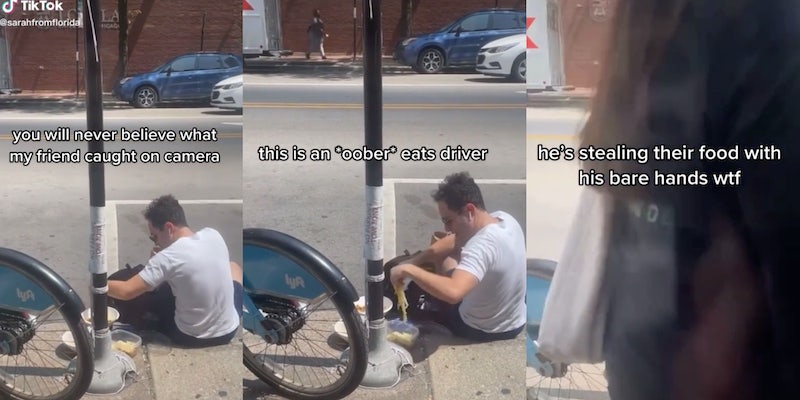 Video: Uber Eats driver caught stealing portion of customer’s food and putting it in his own container (updated)

The man used his bare hands to transfer the food—then he resealed the order bag.

When ordering food for delivery, the common assumption is that once the food is prepared, the only person who will be enjoying it is the person who ordered it.

Unfortunately, in the case of this Uber Eats driver, that’s not what happened.

A viral video—which has gained over 973,000 views on TikTok—shows what the user @sarahfromflorida claims is an Uber Eats delivery driver taking part of a customer’s order and putting it in his own container.

The video shows a man sitting on a curb, which the poster claims is an “oober” Eats driver, pulling noodles out of a takeout container with his bare hand before putting it in his own container. In a follow up video, @sarahfromflorida says that this happened outside of a Chicago restaurant called Mr. J’s Dogs and Burgers. The restaurant from the order, she said, was Friend’s Ramen.

“How will they not notice,” a caption on the original video reads.

When someone asked how the poster, who said the video was sent to them by a friend, knew that he was associated with Uber Eats, the poster replied that the restaurant confirmed he was with the food delivery service.

One commenter suggested that the order may have been canceled after he picked up the order, and he got to keep it.

“The order was probably canceled and he got to keep the food,” they wrote. “Because he would not just be casually sitting there doing that.”

However, others believe this suggestion is flawed for a couple of reasons. First, at the end of the video, the supposed Uber Eats driver grabs a stapler out of his backpack, puts the half-full containers of food back in the paper bag the order came in, and staples the bag shut—making it appear as if the order was untouched. Second, some commenters felt that it was weird of the courier to carry his own takeout container and to take small portions of the food if the entire order was up for grabs.

“Watch the entire video,” one person noted. “He staples the bag with the receipt in the end again. No reason to be doing all that if it was cancelled.”

Another viewer speculated the move was made out of retaliation for a customer who didn’t tip.

The poster commented that the delivery had been reported to the restaurant and Uber Eats by her friend who recorded the whole thing. The man who filmed didn’t confront the courier because he was concerned the driver would lash out.

The Daily Dot has reached out to @sarahfromflorida about the video.

Update 8:27 am CT Aug. 8: In a statement to the Daily Dot, an Uber spokesperson said, ““What’s been described is completely unacceptable. The delivery person’s access to the app has been removed.”