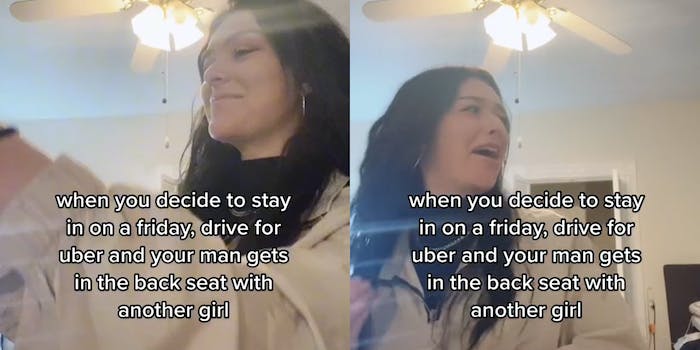 ‘This would be my villain origin story’: Uber driver says she got a ride request from her ‘man’ and another woman

'I feel like the universe is telling me n.'

A viral TikTok shows user Jen (@jword444) re-enacting how she felt when she saw a man she’s been dating get into her car with “another girl” while the TikToker was driving for Uber.

“When you decide to stay in on a Friday, drive for Uber and your man gets in the backseat with another girl,” Jen wrote in the overlay of the video, which was published on Friday. She confirmed that the situation “actually happened” in the video’s caption.

By Tuesday, the TikTok had been viewed almost 2 million times and has over 287,000 likes.

Commenters on the video felt for the TikToker. “I would never recover,” wrote @psyberfae.

“This would be my villain origin story,” @airporthanger commented.

User @lindseyob123 said they had had a similar experience. “I was the waitress for the guy I was talking to and his date,” the user wrote.

The TikToker posted a series of follow-up videos explaining the situation. Jen clarified that she met the man on Hinge and “things were going well” but that they were “not dating.” She had, however, met all of his friends, including the girl that ordered the Uber and got in the car with him.

After the man told her he was busy on Friday, she decided to drive for Uber. When she picked up his friend, she recognized her. After hearing the conversation between the man and his friend in the backseat, the TikToker realized that the man she had met on Hinge was in her car.

“So I look in the rearview mirror and we make eye contact,” Jen said of the man she had been seeing. “And that’s when we both know. I knew it was him, he knew it was me. We had our masks on so that’s why it was hard to tell at first.”

The TikToker said that the man said nothing to her the entire ride, and once she dropped him and his friend off at their destination, he called her and apologized.

“I knew that was you, I should have said something but I just didn’t. I was in shock,” Jen recalled him saying to her on the phone.

In another TikTok, she said that she and the guy also talked the next day, and she asked him if anything had ever gone on between him and the girl in question. He said no.

The day after that, Jen said, she ended up at the same bar as the girl she picked up. She said the woman and the man that the TikToker met on Hinge were “more than just friends.”

“So I text him and I’m like, ‘I have a funny story and we need to talk about it,'” Jen said in another TikTok.

The man she’d been seeing then went to the same bar, and the TikToker and the man talked about the situation.

“At that point he came clean and there was really nothing else to say,” the TikToker said. She also said he picked up her and her friend’s tab, which was over $200, and left a $100 tip.

In an Instagram direct message to the Daily Dot, Jen said she’s not sure if she’ll see the guy again.

“It’s a tough spot because we weren’t officially dating, and I do think he’s really sorry for how it all went down,” she said. “But after all these crazy turn of events I feel like the universe is telling me ‘no’ and I should probably listen.”

Commenters on Jen’s latest videos shared their opinions about the man in question.

“I need more details on him so I don’t find him on hinge,” @cheyennebuntain wrote.

The Daily Dot reached out to Jen.