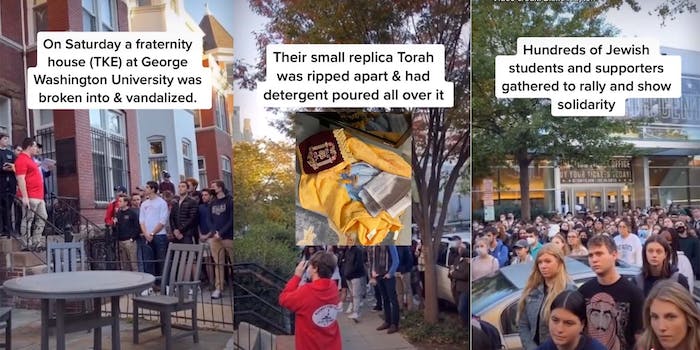 ‘I believe it was a hate crime’: TikTok shows aftermath of Torah vandalism at fraternity house

Students came together for rallies and marches.

On Tuesday, a TikTok posted by the outlet Jewish Unpacked reported that a fraternity at George Washington University was “broken into & vandalized.”

“Their small Torah was ripped apart & had detergent poured all over it,” @JewishUnpacked wrote in the overlay text of the video.

The video then shows hundreds of students and other supporters gathered around the fraternity house in solidarity with George Washington University’s chapter. Jewish Unpacked credited Black Flayton for the footage shown in the video.

The Washington Post reported that there were marches on campus streets and demonstrations at GW Hillel, an on-campus Jewish organization.

Osborne called the vandalism an “act of anti-Semitism.”

“There was a Christian Bible and a Jewish Torah in the room,” he told CNN. “Only the Jewish Torah was vandalized. I believe it was a hate crime.”

In addition to the damaged Torah, Osborne told the Washington Post that the perpetrators had put hot sauce on the walls of the fraternity house and ripped out smoke detectors from its ceiling.

The university’s assistant director of media relations, Crystal Newcomb, told the Daily Dot that the campus police took an initial report of the damage but that D.C.’s Metro Police Department is the “lead agency” investigating the incident.

The D.C. Metro Police’s Brianna Burch told the Daily Dot the investigation was “active.” The department’s police report shared with the Daily Dot revealed further damage to the fraternity house: the kitchen cabinets were stolen and damaged, as well.

In a statement, Tau Kappa Epsilon’s national chapter said it was “disappointed, frustrated, and sickened” by the vandalism.

“This attack on Greek Life and display of Anti-Semitism has no place in our society,” the statement continues.

Similarly, a statement from George Washington President Thomas LeBlanc said the vandalism was a “serious act of hate,” and that “any act of antisemitism is an attack on the entire GW community.”

Adena Kirstein, the executive director of GW Hillel, told the Daily Dot that the Jewish community’s response to the antisemitism is “the true story of Jewish GW,” not the incident itself.

“I remain moved by our Jewish community at GW and motivated to continue to build vibrant Jewish life here on-campus,” Kirstein told the Daily Dot in an email. “Our students are willing to ask critical questions, exercise Jewish values, and stand proudly with our community.”

Photos and videos of Jewish students and supporters gathering and marching were all over Twitter on Monday.

Ron Kampeas, the Washington bureau chief for the Jewish Telegraph Agency, tweeted that turnout for Tau Kappa Epsilon’s procession for the damaged Torah was “several hundred” and shared a photo of a fraternity member holding the Torah.

WUSA9’s Matthew Torres shared a video of a march led by a Rabbi in addition to footage similar to that of Jewish Unpacked’s TikTok.

GW Hatchet reporter @sejalg_ also posted footage of the damaged Torah being raised alongside another Torah “in accordance with Jewish law.”

“Hundreds of members of the GW community sang the V’zot HaTorah in unison,” she tweeted.

The anti-Semitic incident on a college campus isn’t an isolated one: According to an October survey from the Anti-Defamation League partnered with Hillel, one-third of college students who are Jewish reported that they have “personally experienced anti-Semitism in the last year.”

Furthermore, 15% of students that took part in the survey felt pressured to conceal their Jewish identity.

Jewish Unpacked offered advice to Jews everywhere in the face of antisemitism in the overlay text of its TikTok about the Tau Kappa Epsilon vandalism.

“The antidote to anti-Semitism is living proudly as a Jew,” the organization said.