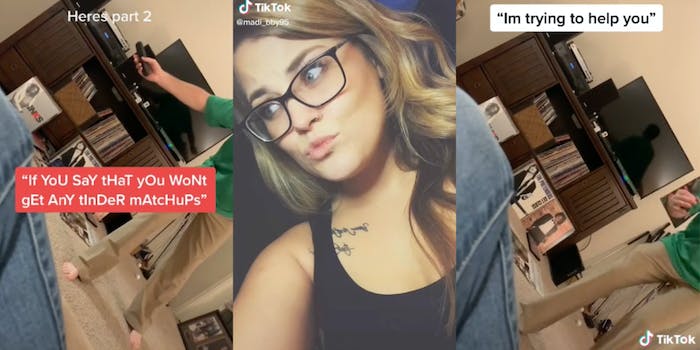 In the video, the mystery man explains how 'adults' use Tinder.

A TikToker managed to catch her date’s disturbing mansplaining session about women on camera.

In November, a TikToker from Indiana, whose name is Madison, went on a date with an audacious man at his apartment to watch a movie. The date turned sour when Madison became uncomfortable and called an Uber to leave, she recently told BuzzFeed.

That’s when the man, who’s outfit bears resemblance to Shaggy‘s, got angry and started his deluded rant about women dating men on Tinder, which Madison managed to record and upload to TikTok. The video has over 1.3 million views and made viewers angry and uncomfortable with his twisted ideology.

In the video, the mystery man explains how “adults” use Tinder.  “They don’t use Tinder to date,” he says. “They use it to fuck.”

After that, Madison tells him that he should be clear about those intentions from the start and in his profile bio. Then, with his whole chest, he says “But then you don’t get any Tinder matchups!”

Madison tries to shut down his theory by saying he is a prime example of toxic masculinity. He denies it and claims that his theories about women are “reality.”

“He looks feral and thinks she owes him something,” one commenter said.

Toward the end of the video, the man weirdly laughs and says he’s not trying to mansplain and that he’s only trying to “help” Madison.

Although not all men on Tinder have the same ideas, it’s clear this guy is drawing from a culture with expectations of women on dating apps. Some concerned viewers were relieved to hear Madison made it out of the situation safely.

“That body language is 2 steps from violence,” another commenter pointed out.

In a separate video, Madison explains the strategic positioning and timing of her exit from the man’s house, in an attempt to leave safely and without violence. She said she remained seated while he was standing up and left only after he sat down.

“Please tell me you got out of there safely,” was the second most liked comment on Madison’s video with over 22,000 likes.

Other notable details from the video include the Scarface poster, golf clubs, Michael Jackson, and the Pretenders albums.