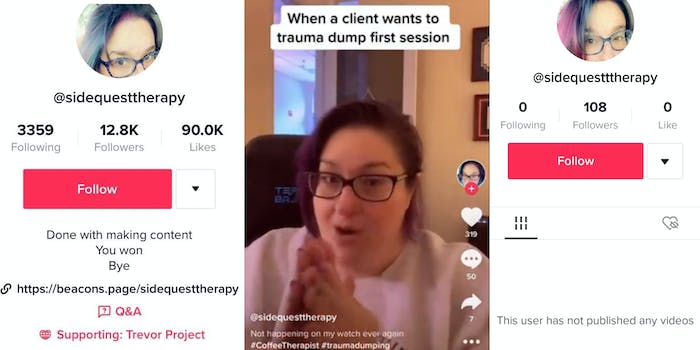 'Is it "trauma dumping" if you’re literally their therapist?'

TikTok therapist @sidequesttherapy came under fire on Tuesday after she posted a video in which she made fun of patients for “trauma dumping” on her.

The now-deleted video included on-screen text that read “When a client wants to trauma dump first session” using the “Holy Spirit Activate” TikTok sound. Screenshots of the video have circulated on Twitter.

According to USA Today, trauma dumping is the act of unloading your emotional grievances onto a person who did not solicit that type of communicating. Twitter users were confused and appalled at a therapy professional using this term in this context.

“Is it ‘trauma dumping’ if you’re literally their therapist? If my therapist told me not to ‘trauma dump’ on them I would start making my tapes,” said Twitter user @diligenda.

One Twitter user, @respexy, said they hold a master’s degree in social work and made a thread on this topic attempting to find a scenario in which a patient could trauma dump their therapist.

“Like, it would be possible to ‘trauma dump’ on your therapist OUTSIDE of session if you, say, cornered her in the grocery store!” the user said.

“Trauma dumping” as a phrase has been gaining popularity on the internet with the rise of concerns of people doing so on social media. The term is being misinterpreted and misappropriated online like other psychology terms such as “gaslighting” and “parasocial.”

An Austin-based licensed professional counselor whose clinic is called Side Quest Therapy has updated his website denouncing any association with the TikToker.

The statement reads, “Side Quest Therapy has NOTHING to do with the disgusting person using the TikTok name of @sidequesttherapy. I have NO staff and if I did, I would NEVER hire someone that sick, insensitive, ignorant, gross, and so completely disconnected from the real purpose of therapy.”

@sidequesttherapy has gone private on TikTok, and all of her videos have either been deleted or made private. Before going private a Twitter user posted a screenshot of her account with her bio stating “Done with making content. You won. Bye.”

Update 2:13pm CT, Oct. 26: The account of the TikToker who made the “trauma dumping” video, @sidequesttherapy, has been deleted.