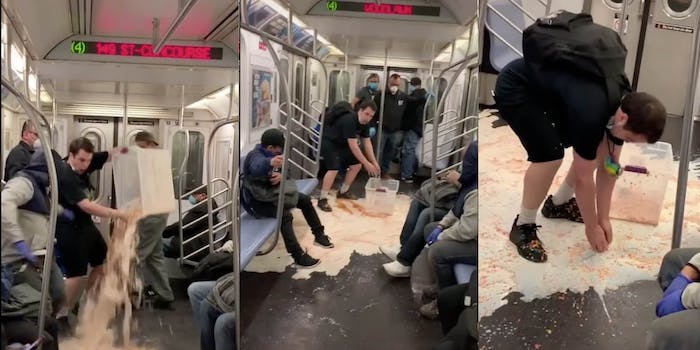 TikTok user @fckjoshy dumped a tub of cereal and milk on a train.

TikTok prankster @fckjoshy is facing backlash for a video he posted that shows him spilling a tub of cereal and milk on a New York subway.

The May 12 video shows @fckjoshy on a subway headed for the Bronx. Seconds into the video, the TikToker says in a voiceover that he “got the munchies” and pours a box of cereal and a carton of milk into a large plastic tub.

After he sits down with the tub on his lap and starts eating, he stands and offers cereal to other passengers. As he stands on the moving subway, he spills the tub of cereal, covering the floor and splashing passengers.

@fckjoshy attempts to clean up the spillage with his hands while others move away.

“Everyone started moving away and filming me, but I was like ‘can someone help?’” he says in the video. “Surprisingly no one offered. So, I had to put the soggy cereal in myself.”

In the second part of the video, @fckjoshy continues picking up the cereal and says in his voiceover that he “can’t believe this is happening again.”

Both parts of the video accumulated over 3 million views on TikTok and over 437,000 likes.

Since posted, @fckjoshy’s video has received criticism for being thoughtless and cruel, notably from New York Metropolitan Transportation Authority.

Others are calling for @fckjoshy to be ticketed and even arrested.

@fckjoshy did not immediately respond to the Daily Dot’s request for comment.