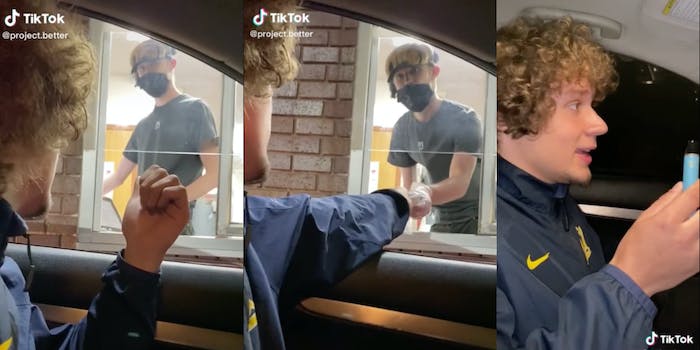 The TikToker, who asked to see the unsuspecting worker's vape pen, calls himself the 'vape police.'

A Soundcloud rapper and TikTok “do-gooder” on an anti-nicotine mission stole a McDonald’s employee’s vape pen and sped away from the drive-thru window.

A Saint Paul-based artist JRI$H pulled up to McDonald’s drive-thru to receive his order. The video starts with the rapper asking the employee, “Do you vape by chance?”

Then, he asks if he can see it. The unsuspecting employee pulls it out and hands it over to him. Alas, JRI$H takes the e-cigarette and speeds off into the night.

The caption for the original TikTok says: “One less vaper off the streets #nomorenicotine#MorningCheer #ThatsHot #YouHaveTo #DinnerWithMe#secretanimesociety #fyp #frickvape.” The video has 2.8 million views on the social media platform, with more on Reddit.

JRI$H calls himself the “Vape Police” on his TikTok account @project.better, which has over 28,000 followers. He takes the “vape police” tack to heart, shaking down suspected vapers and destroying or stealing their vape pens.

He also has a website and a YouTube channel, where he has a video failing to pitch Logan Paul on an idea.

It’s difficult to tell whether the anti-nicotine angle is a marketing ploy for  JRI$H’s musical career or a legitimate strategy, in line with the Truth Initiative‘s campaigns. His YouTube channel consists of two videos, which feature a song called “No Mo Nic.”