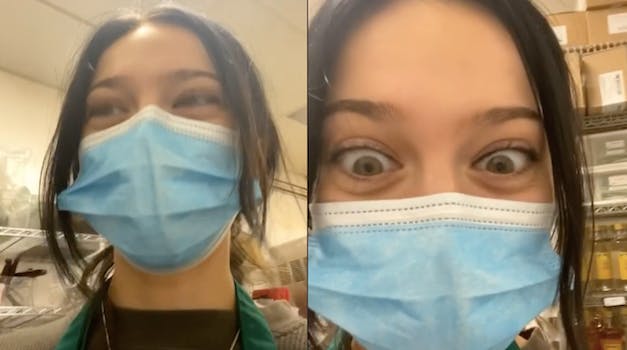 ‘I said let that laughter out’: TikToker says man with ‘laughter kink’ calls Starbucks every Sunday

A TikToker posted a 10-second video of a phone conversation she had with a man she says has a “laughter kink” and calls her Starbucks store every Sunday.

She records herself talking with the man and asking him “Can you repeat what you said again?” He responds in a raspy, low voice and says, “I said let that laughter out.” Seemingly creeped out, the TikToker says, “I’m OK, thank you so much. But can I help you with anything?” before the video cuts off.

The short TikTok currently has over 403,000 views and over 900 comments, most of which are horrified at how creepy the man sounds on the phone.

One person asked the TikToker if the popular YouTuber CorpseHusband called her at work, to which the creator replied with “LOL.” Another commenter wrote, “No joke, this is scary!”

A couple of people joked that it was “Prince Phillip calling from hell.”

The Daily Dot reached out to the creator for comment but did not immediately hear back.