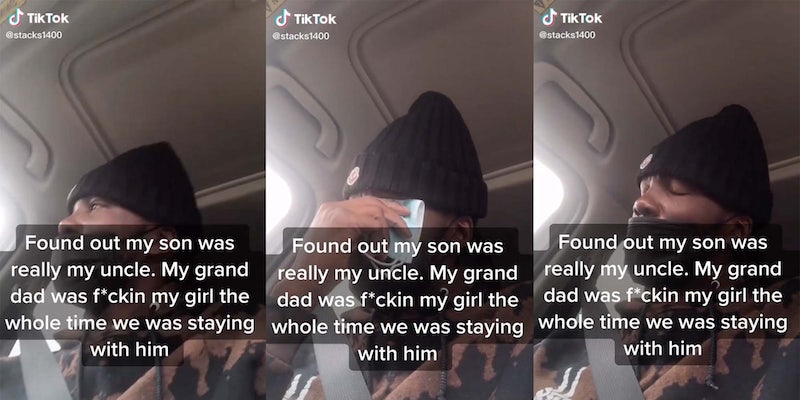 ‘My grandfather has done it again’: TikToker finds out his granddad had affair with his girlfriend

His son is actually his uncle.

In a video posted on April 23, Samir Simpson-Bey, user @StackS1400 on TikTok, shared that the child who he thought was his son is actually his uncle. Simpson-Bey says he found out that his girlfriend had slept with his grandfather.

The TikTok video, which has garnered over a million likes thus far, prompted follow-up questions from viewers that Simpson-Bey took time to answer.

He says when he found out about the relationship between his then-girlfriend and grandfather, he couldn’t believe it. He says his grandfather has had relationships with girlfriends of other family members, as well.

Simpson-Bey remembers thinking “Wow, my grandfather has done it again,” he told the Daily Dot. In another TikTok, Simpson-Bey says that his own father does not have a relationship with his grandfather.

Simpson-Bey also told the Daily Dot that he has not taken a paternity test to confirm that the child is question is not his son because there’s “no need to.”

“I don’t want anything to do with neither party,” Simpson-Bey told the Daily Dot. He did not share his family member’s identities.

Although he shared that he used to have some desire to stay in the child’s life, Simpson-Bey told the Daily Dot that has changed.