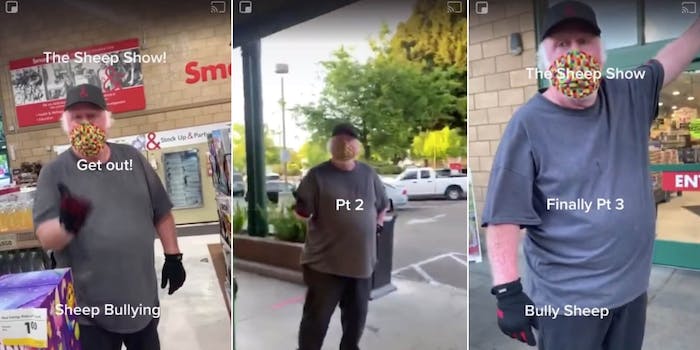 As parts of the United States begin to lift coronavirus-related lockdown orders and public safety restrictions, Americans have grown even more emboldened to disregard the rules and do whatever they want. That includes not wearing face masks inside businesses, such as grocery stores.

But while Americans struggle to reach a conclusion on proper etiquette in these spaces, defying these rules is bound to be a source of friction, as demonstrated by a TikTok video showing one woman’s confrontational grocery store trip.

The video features a woman refusing to wear a mask inside a California-based Smart & Final store, citing a medical condition. A frustrated employee demands to see a doctor’s note, at which point the woman criticizes him for keeping his own mask under his nose.

“You just do your own thing, right? Just do whatever you want to do?” the employee asks the woman.

The initial video, uploaded by TikTok user @charliezen, has over 107,000 views. These sorts of confrontational videos have grown common over the last two months, but lucky for viewers, @charliezen provided not just one, but two follow-ups.

In the second video, the confrontational employee gets chastised by a coworker, who tells him that he shouldn’t speak to customers so rudely. The woman filming thanks the second employee, and the employee raises her fist seemingly in solidarity with her. Ironically, U2’s “Pride (In The Name Of Love)” plays over the store speakers.

The third and final video shows the woman and the original employee bickering outside the store. The employee draws attention to the scene and lets any passerby know that the woman refuses to wear a mask inside. Meanwhile, she continues to taunt him.

As Americans continue to argue about the best ways to combat the spread of the coronavirus in public, these viral confrontation videos will likely keep cropping up.

Unlike most videos of the sort, the Smart & Final showdown has no winners; both parties come off as petulant children. Hopefully at least half the 107,000 people watching their fight got a kick out of it.