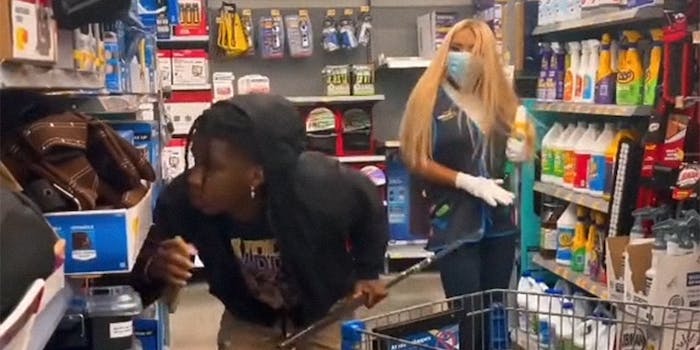 'That pretty much proves my point about rape culture on TikTok.'

In a TikTok video posted on Aug. 19, which has garnered over 2.6 million likes thus far, TikToker @swagboyq inserts a pole in between a Walmart employee’s legs while she is bending down.

She immediately stands up, surprised, and says “you sticked it up my ass, dude.” He apologizes.

Although @swagboyq captioned the video with the hashtag “prank,” comments on the video call his actions sexual assault.

“That is actually assault,” wrote @toothbrushlord.

Other commenters doubled down on condemning @swagboyq, even if the video was staged or the woman was aware of the prank ahead of time.

“It doesn’t matter if it’s staged or not,” wrote @dudeloveme22. “It’s the message it sends out.”

@thebrinalee, a TikToker who frequently speaks on sexual assault on her account, posted a TikTok about @swagboyq’s pranks on August 27.

“That’s a video with 26 million views of a verified creator with 18.8 million followers sexually assaulting somebody,” says @thebrinalee. “I think that pretty much proves my point about rape culture on TikTok.

@thebrinalee also commented on the video, saying that “even if the woman is in on it [that] doesn’t make it okay. Rape culture normalizes sexual assault so it’s taken less seriously. It’s not a prank.”

Rape culture, as defined by Vox’s Amanda Taub, is a culture that treats sexual violence as normal and blames victims for being assaulted.

On August 28, @swagboyq posted another video showing a similar “prank” on a different woman, again bending down in a Walmart aisle.

In this video, @swagboyq touches the woman with a pole twice, which she reacts to. She then continuously apologizes to him, and seems to look at the camera.

@swagboyq told the Daily Dot in an email that both “prank” videos featured paid actors.

@thebrinalee did not immediately respond to the Daily Dot’s request for comment via TikTok comment. The Daily Dot has reached out to Walmart.