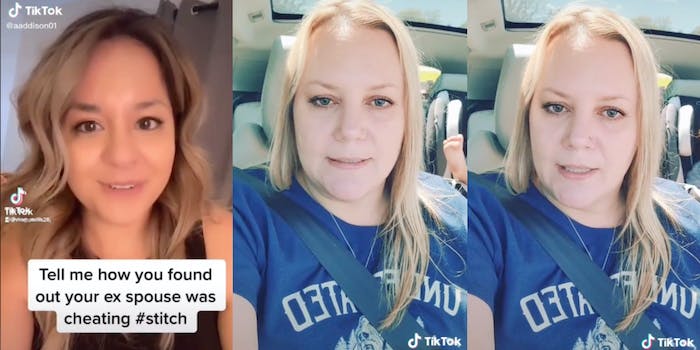 TikToker finds out husband of 10 years has second family

A TikToker’s story about how she discovered her husband was cheating on her is leaving viewers’ mouths agape.

TikToker @mamatoria28 asked viewers: “Tell me how you found out your ex-spouse was cheating on you.”

And TikToker Ami Addison, or @aaddison01 on the platform, delivered. She says in a video that’s been viewed over 200,000 times that she was reading the local newspaper when she stumbled upon the birth announcements.

“At that time, in the newspaper, they would publish birth announcements–the parents’ names, sex of the baby, date they were born, what hospital,” she says. “So I see my husband’s name and some other female’s name.”

She describes her now-ex-husband’s name as “unusual,” so that’s how she knew it was him.

But to be sure, she “typed in his name and her first name” into the local hospital’s website, which hosted photos of new babies at the time.

“Sure enough, they had a baby boy a few days prior,” she says.

And, unfortunately for Addison, the plot only thickened.

“Not only that, they had a baby girl about a year and a half before that,” she says.

“So yeah, that’s how I found out I was being cheated on,” she adds, concluding the video.

Addison revealed in several followups that she left her husband of almost 10 years and has since moved on. She has been with her current husband for the past 8 years.

Viewers are stunned by the story. “Men will have a WHOLE SECOND LIFE. How do they do it?!?!?! I can’t even juggle work and my one monogamous relationship properly,” one said.