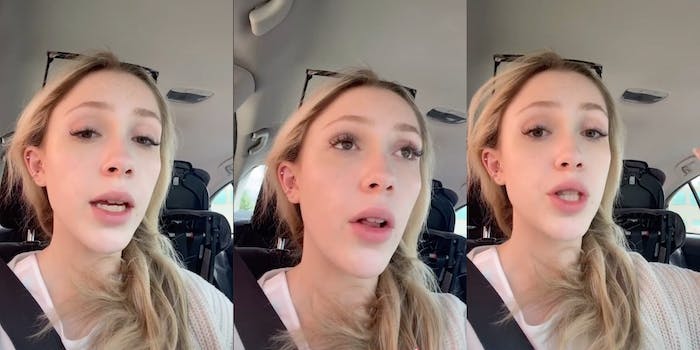 TikToker claims someone spiked her drink at popular nightclub, but the bartender didn’t believe her

'As a female we are told all of our lives to speak up, and when we do speak up, nobody believes us.'

A TikToker claimed a man drugged her drink at a nightclub in Ocean City, Maryland, but when she told the bartender her concerns, she said he didn’t believe her. Her story sparked debate in the comments, reigniting discourse around believing women.

A woman named Kayley, known as @kayleyg21 on TikTok, said in a viral video that it was important for her to share her story to help protect other women who may enjoy the popular Ocean City nightclub Seacrets. The video has received over 860,000 views and almost 150,000 likes on the platform.

Kayley says she was celebrating her bachelorette party at Seacrets when she saw someone slip something in her drink.

“The crowd there was very predatory, but unfortunately that’s something that women are all too familiar with,” she said in her video.

When she began leaving the bar about half an hour before its close, she saw a man out of the corner of her eye tamper with her drink. She says she tried it and it tasted off.

Kayley took the drink to the bar and handed it to the bartender, explaining what happened. She says he scoffed at her and poured the entire drink out. Then, he charged her for a new one without asking who did it or if Kayley was safe.

The caption on her TikTok says the nightclub was initially “radio silent” in response to her claims, but the club has since gotten in touch with Kayley.

Many of Kayley’s viewers believed and supported her in the comments, with some even reinforcing her story by describing their own alleged experiences at the nightclub.

“Girl this happened to my best friend two summers ago at Seacrets,” one person said. “She was so sick. Thank god whoever did it didn’t get to her. Mgmt didn’t believe us.”

“They’ve known about this for years,” another shared. “Happened to my mom in the 90s.”

Despite the overwhelming support, a few questioned her for tasting the drink after she saw someone allegedly tampering with it. One user commented, “You saw someone slip something in your drink and proceeded to taste it?”

In a video response to this question, Kayley took the opportunity to address a common fear women face—not being believed if she spoke up.

She said she tried the drink out of “paranoia” but admitted it was a “stupid” decision. Then she criticized the comment and all the users who focused on her double-checking the drink, rather than the bartender who ignored her claim.

Kayley clarified in other follow-up TikToks that her party had gotten to the nightclub late due to the weather that night. She was only on her second drink at the time the man slipped something in it. She said she had her wits about her the entire night, but even if she was wrong, the bartender should have still listened to her story and done something about it.

Several viewers defended and sympathized with Kayley after she shared her troubling experience and received victim-blaming comments. They also took to Yelp with their complaints.

“Why are so many people blaming her for trying it instead of blaming the actual problems here? We don’t get our stories heard, we aren’t believed,” one user commented.

Another said, “Pro reviewer off to google and yelp.”

Yelp has since flagged Seacrets on its site, saying “This business is being monitored by Yelp’s Support team for content related to media reports.”

When one viewer asked if there was any update on Kayley’s situation, she said in a recent TikTok video that Seacrets has been investigating her story and began communicating with her clearly.

Kayley says the nightclub did locate the man through security camera footage, but they couldn’t see him slip anything in her drink because the club was too crowded at the time.

In regards to the bartender, she says she was informed that the bartender denied hearing any mention of her story. When Kayley countered that claim, the club told her they reinstructed their staff on how to handle situations like hers.

Neither Kayley nor Seacrets responded to the Daily Dot’s request for comment by the time of publication.