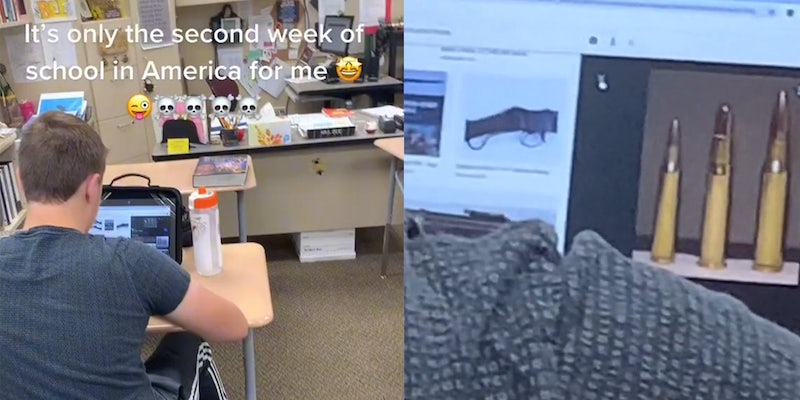 The same day that new loosened gun laws went into effect in Texas, TikToker @Coasterlvl500 shared a now-viral video of her classmate shopping online for guns during class.

“[Trigger warning]. Anyways can’t say to die,” the caption readers along with hashtags referencing school shootings. “It’s the only second week of school in America for me,” the voiceover on the video says.

“[I know] this is probably just a joke but please tell someone it could save lives,” @sockcatboy added.

Others didn’t take the video as seriously. “What if they just like guns?” user @i_dont_know_maybe suggested.

The 2021 gun legislation Gov. Greg Abbott signed works in conjunction with previous laws allowing university students to open carry guns in classrooms and on school campuses. Texas adults are now allowed to open or concealed carry most types of firearms in many public spaces, including hotels, without a license or background check.

Texas joined five other states that have declared themselves “Second Amendment sanctuaries,” and 19 other states with permitless or Constitutional carry laws after the new legislation went into effect on Wednesday.

The Daily Dot reached out to @jodieisemo via TikTok message for comment.