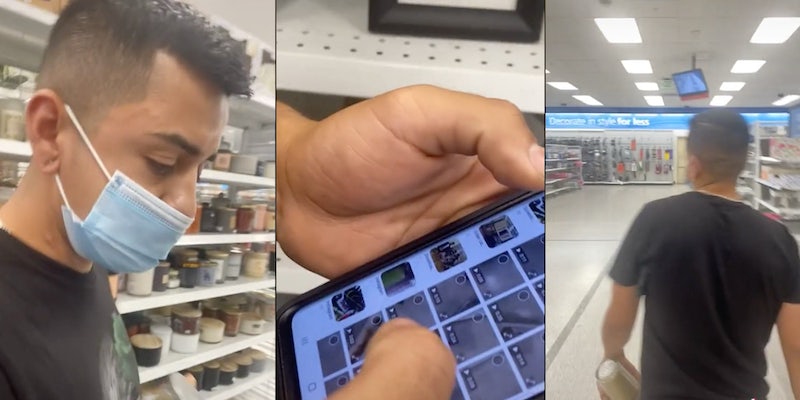 ‘That is so uncomfortable’: TikToker chases man out of Ross after catching him record her

'This guy was so scared of me he didn't notice he was stealing a candle.'

A California woman exposed a fellow Ross shopper in a series of TikToks Thursday after she allegedly caught him “crouching down behind” and recording her. She demanded that the stranger delete the several videos he had of her on his phone.

The woman, whose TikTok username is @Gretchenweenie, captured the man quickly walking out of a Ross department store with an allegedly stolen candle as she attempted to gain a store employee’s attention.

“Excuse me, he was recording me and he has a bunch of videos of me,” she says. “This guy was so scared of me he didn’t notice he was stealing a candle.”

In another video, the TikToker approaches the man and films the videos of her on his phone. “Let me see,” she says. “That is so uncomfortable that you are doing that.”

The man, who is holding a candle in his hand, says, “I’ll delete them, OK,” as he selects dozens of videos on his phone. The TikToker says, “Delete all of them and I will report you, what’s your name?”

The man does not tell her his name but continues to look at his phone as she says, “You’re fucking sick, dude. You’re sick.”

The TikToker then points the camera at the man’s phone, showing that he’s deleting the videos. The man begins to walk away and she says, “I can’t believe you are doing this shit. You’re sick.” She follows him and says, “I’m gonna fucking find out where you fucking live and report you.”

In another TikTok, a different customer confirms seeing the man record the TikToker and says, “Yes you were, I saw you.”

The TikToker, who did not respond to the Daily Dot’s request for comment on TikTok, wrote in a TikTok comment that the incident occurred in Duarte, California, and that she called the police but they “didn’t do anything.”

“He was crouching down behind me recording my ass,” she wrote in a TikTok comment. “If you think that is OK [you] are what is wrong with this world.” She also confirmed that the store did not “get him for stealing.”

The initial video, which has received nearly 650,000 views and over 79,000 likes, prompted support from commenters who validated the TikToker’s reaction to being recorded.

“I would have tried to grab his phone and break it,” @halleylondonn commented. Another said, “Happy you standing up for yourself girl!”

The TikToker and Ross did not immediately respond to the Daily Dot’s requests for comment.