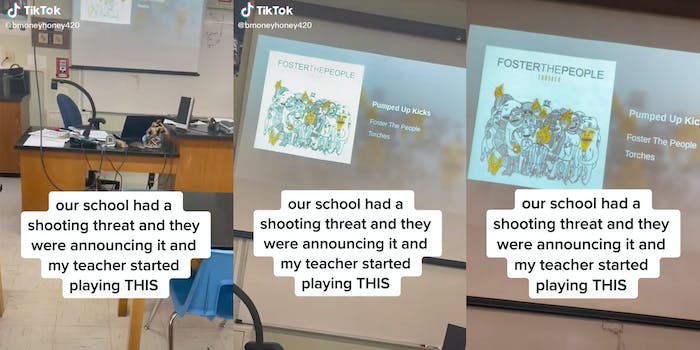 ‘You better run faster than my bullet’: Teacher plays ‘Pumped Up Kicks’ in classroom during school shooting threat

'Your teacher wrong for that.'

In a viral TikTok posted on Saturday, a high school student says that her teacher started playing Foster the People’s “Pumped Up Kicks” after her school experienced a shooting threat. The song is about a student who is planning to shoot his classmates at school.

Although the 2011 song made it to Number 3 on Billboard’s Hot 100, its “dark meaning” hides behind its catchy tune. “Pumped Up Kicks” was even pulled from radio stations after the Sandy Hook Elementary School shooting in 2012, according to Billboard.

In the wake of other mass shootings, the band stopped playing the song at festival gigs in 2017. Mark Foster, the band’s lead singer, even told Billboard he wanted to “retire” the song in 2019.

“It took people a while to let the lyrics get into their bones and I think that once the lyrics got under their skin it was a bit of a slap in the face,” Foster told Billboard in a 2019 interview. The outlet heralded “Pumped Up Kicks” as a song that defined the 2010s.

In honor of the 10-year anniversary of the song, the band is releasing a “reimagined” version of the song.

TikTok users in the comments section of @bmoneyhoney420’s video, which has over 1.9 million viewers, were all too familiar with the song’s lyrics.

“Your teacher wrong for that,” commented @graes_final_braincell.

“Every time my school goes into lockdown and we’re all running to hide,” commented @bumblenuggie, “this song plays in my head.”

@bmoneyhoney420 did not immediately respond to the Daily Dot’s request for comment.