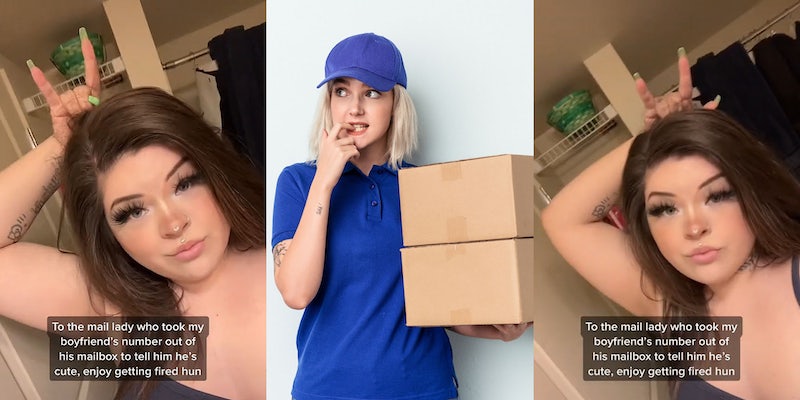 ‘That’s so weird’: A woman claims a local postal worker texted her boyfriend to say he’s cute. Commenters think it was inappropriate

'Wtf is wrong with people?!'

A woman on TikTok says a postal worker got her boyfriend’s phone number from his mailbox, then texted him to say he’s cute.

The woman (@bougeestonerprincess_) shared a video of herself dancing as she detailed what happened. The video received about 51,000 views as of May 14.

“To the mail lady who took my boyfriend’s number out of his mailbox to tell him he’s cute, enjoy getting fired hun,” the video’s on-screen text says. In the video’s caption, the TikToker adds that her boyfriend showed her the text immediately and they laughed about it.

He showed me immediately and we laughed about her, stalker bout to lose her job😂

Commenters thought the postal worker’s actions were weird and inappropriate.

“Damn, wtf is wrong with people?! That’s some stalker type shit,” one viewer commented on the video.

“Ooooof that’s icky for sure! I hope she enjoyed her job while she had it! That’s a HUGE offense! Lol,” another viewer commented.

A third viewer wrote, “that’s so weird who does that.”

Several viewers asked why the TikToker’s boyfriend had his phone number in his mailbox. In reply to one of the comments, the TikToker said, “It was on his mail, she said she held it up to the sun and she could see it on his bill.”

In another comment on her video, the TikToker shared more details about the postal worker.

“She even messaged him that she would be on his route, not for long hun. She said she held his mail to the sun to read it & didnt open it #stalker,” she wrote. “I filed a complaint and sent in the screenshots. Hopefully she gets fired, might even do jail time! I’ll happily testify.”

The Daily Dot reached out to user @bougeestonerprincess_ via TikTok comment.