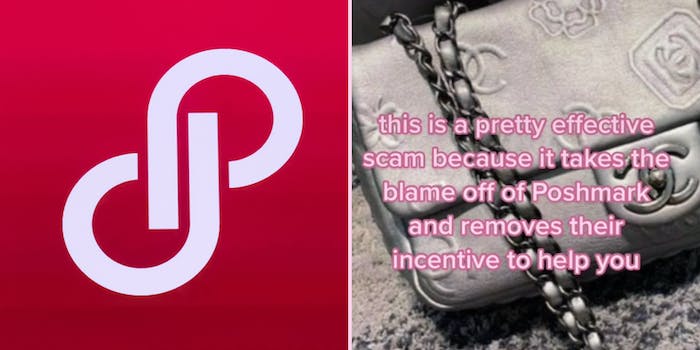 'This is EXACTLY what happened to me!'

After allegedly getting scammed out of a Chanel purse on Poshmark, a resale app for clothing, TikTok user Blair Waverly (@BlairWaverly) made a video revealing how the “most common” scam on the platform works.

Waverly’s video opens with a photo of the bag she tried to purchase, a gray Chanel flap bag with ruthenium hardware listed at $480. Retail prices for similar bags are upward of $4,000.

“Last year I purchased this bag and I actually offered $400 and they accepted,” Waverly says. “And you might be thinking that’s the first red flag. It is. However, I’ve actually purchased two or three Chanel bags on Poshmark, authenticated, for under $300, so you know, win some, you lose some.”

She continues, “They had a few other listings, it looked decently legit, sometimes people just get rid of their shit for less than they should.”

But on the day the bag was meant to be delivered, she realized something was off.

“I see my mailman, I get my mail from him, he does not have a package,” she explains. “Then, the tracking updates and says, ‘Your package has been delivered.’”

Fearing a scam, Blair “did a little bit more digging.” She continues, “I was able to actually find the listing that they stole the photos from. I email Poshmark and was like, ‘Hey I’m being scammed help me.’ Poshmark gets back to me and says basically that if my package was stolen or lost, it’s not their problem; I need to file a report with USPS.”

Waverly went to her local post office, where employees discovered that the package was dropped off at the wrong address, but Waverly says the post office “knew [the package] was supposed to go to my address.”

Employees also showed Waverly a scan of the package with the incorrect address. She proceeded to go to the residential address on the package scan to see if her bag would be there. She only found an open, empty envelope that couldn’t have fit the bag she ordered.

After recounting this, Waverly tells her followers how the alleged mail scam works.

“The scammer took my shipping label, downloaded it, photoshopped in an address near my house so that the posting would more or less track,” she says.

“Basically, the postman scanned the package and it was supposed to go to my house, but then he looked at the address and realized, ‘Wow this address isn’t right here, I need to take it to the right address.’ Human error,” she continues. “They were hoping, which almost worked, that I would just assume that my package had been stolen out of the mailbox. If I hadn’t been home and that was a reasonable assumption, I might have just thought, ‘Wow my package really just was stolen’.”

Waverly confirms that once she compiled all the evidence and sent it to Poshmark, the company refunded the order and gave her the money back. She believes, however, that had she not compiled all of the information, she would not have gotten a refund.

Many commenters on Waverly’s video say they have experienced something similar. “This is EXACTLY what happened to me!” one commenter writes. “Except Poshmark refunded me a day later, it’s a super common scam on posh now!” Another says, “That happened to me!! I thought it was so weird it was delivered somewhere else but it was never found.”

Update 12:51pm CT, March 23: A Poshmark spokesperson spoke to the Daily Dot regarding Waverly’s TikTok and the scam on their platform, saying the following. “Preserving the trust and safety of our ecosystem is our top priority. We are aware of this issue, and we continue to invest significant resources to quickly detect and stop this behavior. These occurrences are rare. Affected users are encouraged to reach out to Poshmark directly to report this behavior so we can ensure they are not financially impacted.”

The Daily Dot reached out to Waverly via TikTok comment and to Poshmark via email.