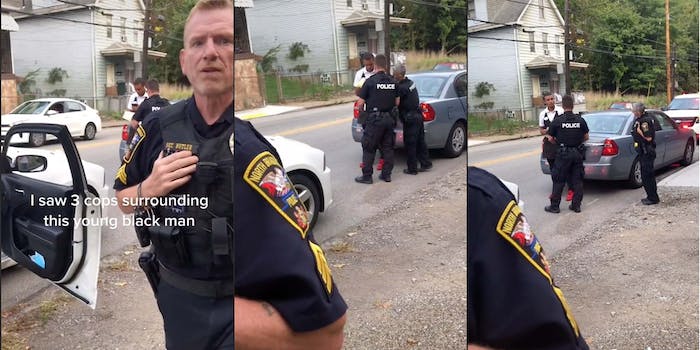 She asked the Black man if he needed help, and he said 'yes.'

In a video posted on Monday, a police officer blocks a woman (TikToker @leannsedlockalley) from recording an interaction between a young Black man and other officers by standing in her way and threatening her with a citation.

When told she would receive a citation for allegedly parking illegally, she told the officer she’d “take that.” Commenters noticed that the officer shown in the video was covering his badge and found it suspicious that three officers were dealing with the man in question.

A user named @waytoeazzy commented on @leannsedlockalley’s initial video and identified himself as the man who asked for help.

In a follow-up video, the officer is seen examining @leannsedlockalley’s license. He then decides to not give her a citation because she’s a veteran.

“I’m not gonna write you a ticket,” the cop tells her after explaining how she had allegedly parked illegally.

According to a survey from Cheap Car Insurance, 19% of white women said they’re “always” let off with a warning. Black drivers, however, “were most likely to report never getting out of a ticket” at 34% of respondents.

TikToker @leannsedlockalley lovingly shouted out commenters who called her a “Karen” in the caption of her follow-up video.

The Daily Dot has reached out to @leannsedlockalley.