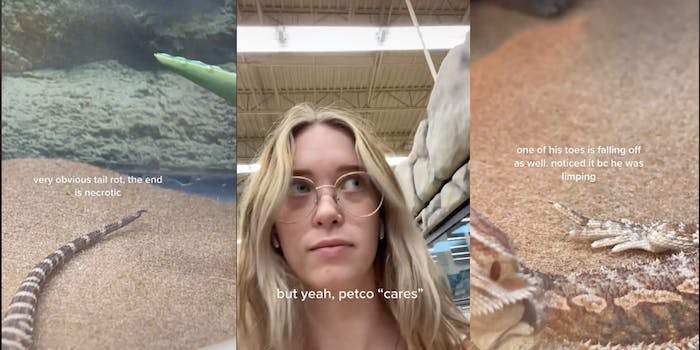 A viral video posted last month shows a TikToker accusing a Petco store in Texas of neglecting a reptile for sale.

Kamryn Ray, TikTok user @smaugthebeardie, said she believed a bearded dragon at the pet supply store was sick. Her content focuses on procuring and taking care of reptiles such as her own bearded dragon, Smaug.

The video, which gained over 241,000 views, shows a bearded dragon in its cage as the creator of the video points out its alleged ailments.

Ray says the bearded dragon has “tail rot” and a toe falling off due to necrotic tissue. The video’s caption says that the animal’s welfare is “just another reason to not purchase live animals from Petco. They make profit off of sick animals and it doesn’t stop.”

Commenters on the TikTok video made additional allegations that Petco and other chain pet stores neglect animals they sell.

User @shortyyj_official wrote that “as a former employee I was threatened with termination for wanting to go to corporate. As well as offering to bring better supplies from home.”

Another commenter, @bmx__807, said they are a former assistant store manager and that “vet bills are a factor in the manager bonuses and some stores try to keep bills at the lowest possible.”

Some people in the comments section asked if Ray had tried to buy the animal to give it proper care. But user @theunrealhannah said that “buyers aren’t ‘rescuing’ by buying them either, you are financially supporting the business and providing them the capital to do this again and again.”

“They don’t really promote select care, especially when we see them like that. It doesn’t really show the people that want to purchase the animals from them the correct care that they need to keep supplying them at home,” Ray said. “[Petco] produce[s] really terrible, mediocre enclosures, and [customers] think that they can do the same thing at home.”

The Daily Dot reached out to Petco for comment.