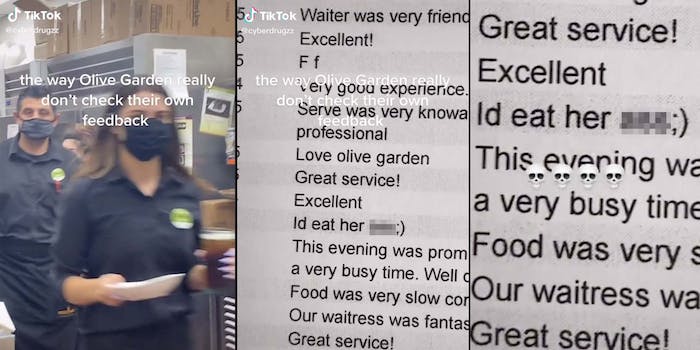 'The way Olive Garden really don't check their own feedback.'

In a viral TikTok posted on Wednesday, @cyberdrugzz shares an internal Olive Garden document with feedback from customers about their waitstaff.

Between feedback like “excellent” and “great service!” one line of feedback reads, “Id eat her ass ;).”

“Nonstop [sexual harassment] in the food service industry,” commented @raptvneverbrokeagain. “You can’t even spin this as a harmless compliment.”

In a recent survey from One Fair Wage, a nonprofit organization advocating for the rights of restaurant workers, 71% of female restaurant workers said they had been sexually harassed at least once while working in the food service industry.

The TikToker commented that their boss “shrugged his shoulders and laughed.”

“Our female manager blacks it out,” @cyberdrugzz added.

Others in the video’s comment section categorized the feedback as a joke or even agreed with the vulgar comment.

In response, @cyberdrugzz shared the Instagram handle of the waiter who received the comment and pointed her out in the video, as well. TikTok users also shared information about the server’s Instagram in the comments of the video.

“That’s gross and so are some of these comments,” commented @risingtofame.

Neither @cyberdrugzz nor Olive Garden immediately responded to the Daily Dot’s request for comment via email.