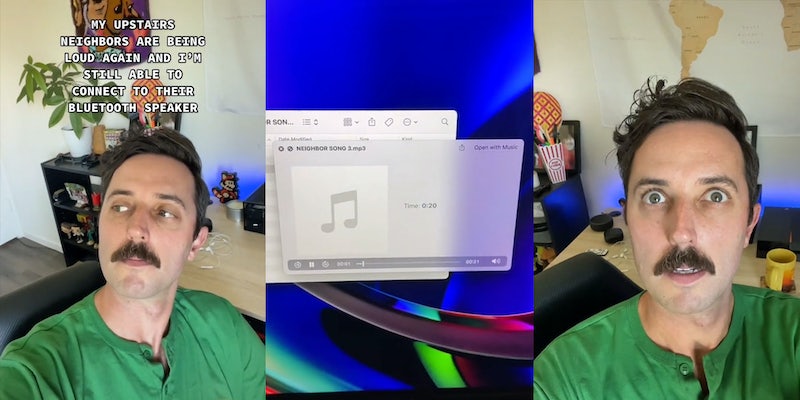 ‘If this came through my Bluetooth I would accept defeat forever’: Man connects to ‘loud’ upstairs neighbors’ speaker in viral TikTok prank

'The way I just choked laughing at this.'

A TikToker has gone viral after trolling his loud upstairs neighbors via their Bluetooth-connected speaker.

Matt O’Brien took to TikTok to share how he pranks his neighbors when they’re playing loud music: by creating a song of his own, connecting to their speaker, and playing the tune.

The video, which now has 3 million views and over 400,000 likes, depicts O’Brien in his home while the text overlay reads, “My upstairs neighbors are being loud again and I’m still able to connect to their Bluetooth speaker.”

In the background, you can hear noise and music presumably coming from his upstairs neighbor.

He then proceeds to walk over to his computer and open a file titled “loud neighbor songs”, selecting and playing Neighbor song #3.

Set to the tune of Beethoven’s Symphony No. 5, O’Brien sings the lyrics, “Your music sucks, please turn it down, also pick up after your dog.” He plays the song once for TikTok and then connects to his neighbor’s speaker, where you can hear the song in the background. The neighbor then proceeds to angrily bang on the floor, and the camera pans away as O’Brien says “Oh, shit.”

This is not the first time that O’Brien has attempted to tell his neighbor to quiet down via musical prank. In June of 2021, he set a similar song to Edvard Grieg’s In Hall of The Mountain King and played it on presumably the same neighbor’s speaker.

Commenters found the prank hilarious, with one user saying, “This is the level of petty I aspire to be.” Others agreed, calling the prank “legendary” and “brilliant.”

However, some commenters sided with the neighbors, saying, “so they’re not allowed to listen to their music because you don’t like it?”

Another agreed, saying, “This is funny, but dude, it’s the middle of the day and I could barely hear their music even with you being silent.”

The Daily Dot has reached out to Matt O’Brien via TikTok comment in regards to this story.