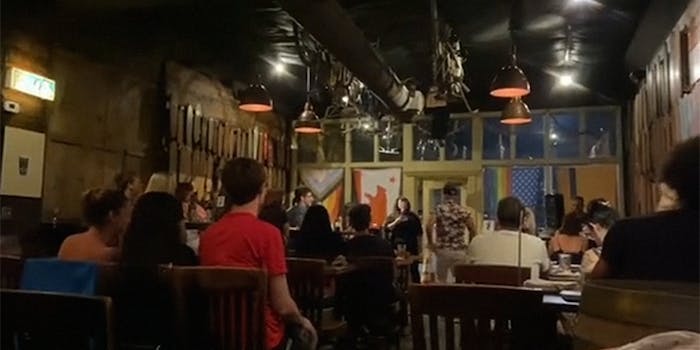 ‘Who knows what he could have done’: Man charges TikToker during her comedy set (updated)

In a TikTok posted on Aug. 3, comedian Jenny Zigrino is approached by a male audience member while performing a standup comedy set.

When the man stands up from his chair in the audience, Zigrino tells him to “sit back down.”

Male comedians then approach Zigrino to help her, and the overlay text in the TikTok says they threw the unruly audience member out.

In a follow-up video, Zigrino says the man was inebriated and gave her a bottle of wine while she was performing and then sat down. He was then “generally disruptive,” and Zigrino called him out.

“And then he came up toward me, not like he was going to attack me,” said Zigrino. “But like, aggressively make out with me.” In a phone interview, Zigrino told the Daily Dot that the man came within four inches of her, and she pushed him away.

In a second follow-up video, Zigrino says the man came up to her after the show, and said their interaction was “crazy.”

“Men and women are so different!” Zigrino said.

Zigrino told the Daily Dot that her experience as shown in the TikTok is not an isolated one.

“This happens to female comics all the time,” Zigrino told the Dot. She said that when audience members are being aggressive or “sexually weird,” she has asked male comics to walk her to her car after the show.

In a column for Chicago’s Second City from 2015, Ashley Nicole Black wrote that comedy is “one of the few jobs where people feel comfortable coming up to you at work and yelling directly at you.”

She explained the difference between heckling, audience members shouting at comedians, and harassment, “an audience member attempting to stop a comedian from expressing themselves because of their gender.”

Zigrino told the Daily Dot that harassment is when comics are constantly interrupted and can’t get through their jokes because audience members “say mean things” to comedians.

“I’ve been like called fat on stage,” said Zigrino. “And like, have been told to take my top off.”

“Often women are told to ‘just get over it’ because heckling is part of a comedian’s job,” writes Black. “But harassment and heckling are different, and comedy is a job.”

Commenters on Zigrino’s videos were upset by her experience.

“Why did all those capable people in the audience near the front just watch?” commented @trashleyh.

“He came up to stand over a woman and intimidate her,” wrote @ratboydante. “Who knows what he could have done.”