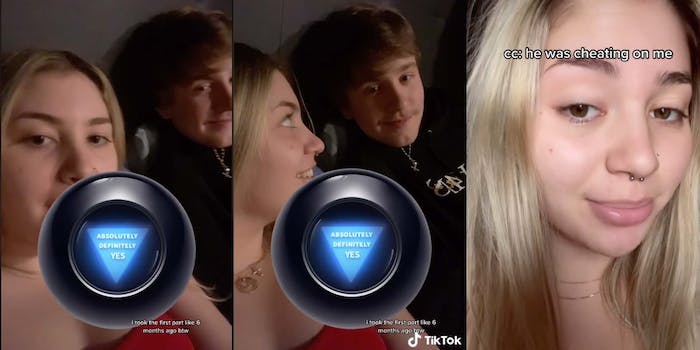 ‘You could see the panic in his eyes’: TikTok filter predicts girl’s boyfriend is cheating on her—he actually is

'I thought it was pretty ironic.'

In a viral TikTok posted on Aug. 3, Keyana Both asks a Magic 8-Ball filter if her boyfriend, Skylar, is cheating on her. The filter answers “absolutely definitely yes.”

“He was cheating on me,” Both says at the end of the video, which she filmed six months after using the filter. Both told the Daily Dot they have since broken up.

Both, 17, told the Daily Dot that she had seen TikToks of girls using the filter with their boyfriends and correctly predicting infidelity. So, she “tested it out” on her boyfriend at the time “as a joke.”

“When I had found out my ex-boyfriend was cheating on me I thought it was pretty ironic since I had this sitting in my drafts on TikTok for about 6 months,” Both told the Daily Dot.

She said that she didn’t expect her video to go viral, and that she has received a lot of support from her new followers; Both currently has 45,700 followers on TikTok. The video now has 13 million views.

“U could see the panic in his eyes,” wrote one commenter.

“Girl u deserve so much better,” wrote another. Both liked the comments.

“It has been roughly a little over a month since we’ve broken up and I genuinely couldn’t be happier,” Both told the Daily Dot, adding that the relationship was an unhealthy one.

“I am doing everything for me now and living my best life,” she said.