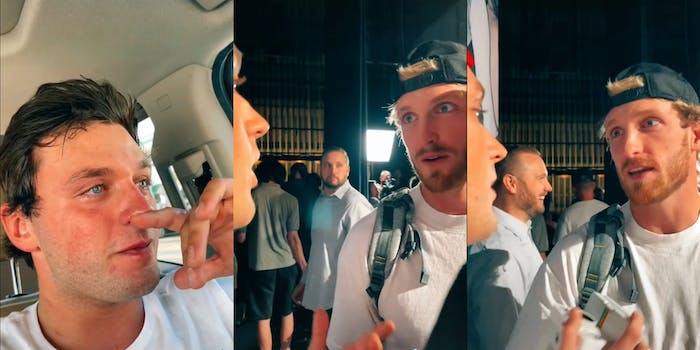 ‘Why would I give you a job?’: TikToker quits $100K salary job, begs Logan Paul to hire him—and cries when it doesn’t work

'How entitled are you bro?'

An Ohio man went viral on TikTok after he said he quit his job and tried to convince YouTuber Logan Paul to hire him. But his plan flopped.

Austin Wallace, user @aj_wallace69, explained his thought process in a TikTok that shows him crying after not getting the job. Wallace says he’s 22 years old and was earning $100,000 per year. “That’s cool,” he says, but he wants to act and “do these things.” Now he doesn’t know what to do.

The TikTok, which has 11.9 million views, shows Wallace approaching Paul and telling him he “took a risk” quitting his job. Paul asks Wallace what he’s good at, and Wallace says TikTok dances.

“So you really got what it takes?” Paul asks. And Wallace replies, “I don’t.”

As it turns out, quitting a $100,000 salaried job to beg a YouTuber to let you work for him then admitting you don’t have what it takes isn’t the best career plan.

Paul’s next questions are, “Then why would I give you a job? Why would I do that?”

The TikTok skips Wallace’s response to show Paul explaining that he can’t be a mentor to someone else. “I’m a fuck up myself,” he says. “I need a mentor, you know what I’m saying? Like I need a mentor.”

Wallace starts pleading, saying that the people around Paul helped him get to where he is now as an internet celebrity. But Paul discredited the remarks, saying he didn’t have any connections when he first got started.

Paul says he’s glad Wallace quit his job because “it takes balls to do that,” but he isn’t going to just hand him a job. Instead, Paul says, Wallace should go make content with his friends.

“I’ve always said this: If you’re charismatic and you can talk to someone, you can make it in L.A.,” Paul says.

TikTok viewers were aghast at Wallace’s decisions, and several called him out in the comments section for being entitled.

Several viewers said Paul had no logical reason to give Wallace a job and handled the situation well.

“Not a fan of Logan but he handled this well. I don’t know what you thought would happen here or why it was a good idea,” one viewer wrote.

Despite getting rejected and publicly ridiculed on the internet, Wallace doubled down on his decision and decided to roll with the punches. Another TikTok shows the user wearing a shirt that says, “Logan can I have a J.O.B.?”

The TikTok also includes a clip of a TikTok who boxer Jake Paul, Logan Paul’s brother, appears to have posted but since deleted. The clip shows Jake imitating Wallace asking Logan for a job with sad eyes and a pouty lip.

Wallace shared another TikTok in which he says “money is nothing compared to your dreams” and basically pats himself on the back for pursuing his dreams—even if it didn’t well.

“Did I look pathetic? Maybe to you,” Wallace says. “But what I saw, what I felt like — I had some fucking balls, unlike some people that would never, ever confront Logan Paul.”

Wallace appears to have since created a vlog and tried to get his old job back.