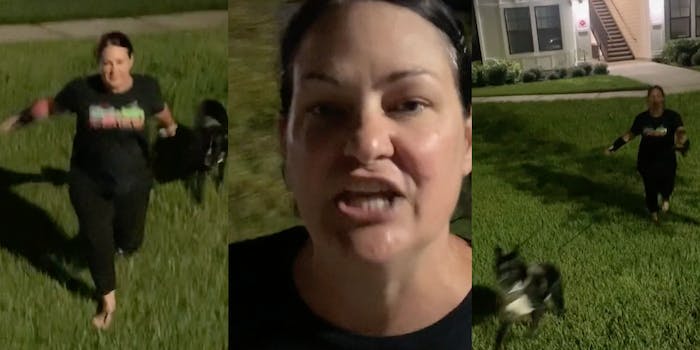 ‘How long have you lived here?’: Karen harrasses Black neighbor walking her dog, charges at her in viral TikTok

Viewers were impressed at the TikToker for keeping calm the entire time.

A Black woman captured the moment a white Karen came up to harass her while she was walking her dog around their apartment complex. The video, posted to TikTok by Ty or @_hottymale, has amassed 1.4 million views in less than a day and has people praising the poster for keeping her calm composure in spite of the Karen’s rising temper.

The TikTok starts as the Karen struggles to control her own dog and begins to step toward Ty, who is recording the incident. The Karen curses at Ty for filming the intense encounter.

“Fuck you and your fucking phone,” the Karen yells, backing away from Ty. “Get the fuck out of here.”

“How long have you lived here?” the Karen questions.

“Like a fucking month?” the Karen presses, seemingly trying to establish some sort of authority for having lived in the complex longer.

The Karen continues to scream at Ty to leave, despite the fact that Ty lives in the complex. She then tries to criticize Ty for using her phone in the first place.

“You know what bitches like you are the reason cell phones are a thing these days,” the Karen says, garnering some confused and amused responses in the comments.

“I’d like to thank you for being THE reason cellphones are a thing,” one user wrote under the video.

“Cellphones are a thing?” another remarked sarcastically, adding a laughing emoji.

The video continues as Ty stands her ground and the Karen asserts that she has lived in their complex for over a year. Ty states that she’s not going anywhere and that she is just walking her dog. She proceeds to call the neighbor “Karen” which appeared to strike a nerve, as the Karen began charging toward her.

The Karen continues to get up in Ty’s face until a man gets between the two women and tells the Karen to go home.

Ty said in a follow up video that the incident occurred in Riverview, Florida and the Karen just started yelling at her to move. Ty looked up, confused as to why the Karen was screaming at her from across the complex lawn, and she claimed the Karen told her to move because she wanted to walk her own dog.

In another follow up video, Ty says that she took the incident to the leasing office, but the property manager wasn’t there. She then tried to file a police report, but was told there was nothing she could do because the altercation was verbal, not physical. The only solution, she was told, was to file a restraining order and take it up with her leasing office.

One commenter remarked on the original video, “I understand you didn’t want to go to jail but she would have got the combination for walking up.”

In a video response to that comment and several others from people who said they would have hit the Karen for charging them, Ty explained why she couldn’t do that.

“Had I have hit her, [a police officer] said she would have had grounds to file a battery charge against me because I did not move away and then I would have struck her first,” she says. “Everyone has different priorities. My freedom is a priority, but hey if you want to go out there and fight and tussle, do that. But with me being a Black woman and her being a white woman…” She ends the video there, making a face that suggests viewers fill in the blanks.

The Daily Dot reached out to Ty for comment.