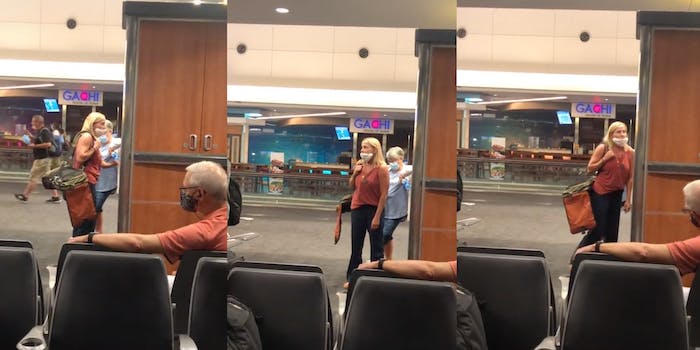 The TikToker who filmed the incident attempted to diffuse the situation after the Karen was nearly arrested.

Even as reported cases of COVID-19 surge due to the arrival of the more contagious Delta variant, resistance to wearing masks has not gone away. A viral video of a Karen loudly expressing her displeasure, calling mask wearers at a Southwest Airlines gate “sheeple,” has gained 58,000 likes and 776,000 views on TikTok.

“What is your problem?” the Karen says in the video. “Take off those fucking masks and wake the fuck up! You pathetic people. And we call you Americans? Where’s your balls? My balls are right here.”

She can be seen speaking to someone just out of sight of the camera, and she asks, “You’re going to arrest me?”

After the person filming thanks her for her service, she shouts that she is going to be arrested for not wearing a mask. The person filming can be heard trying to calm her down from the point she is at, as she continues shouting.

“I know you don’t like what they’re doing here, but it’s going to be okay, alright?” Tunç can be heard saying in the video. “Thank you for serving for us, thank you for fighting for our freedom. So please, don’t let them do this to you, okay?”

She replies by saying that it is time to “wake the fuck up” and that the “whole COVID thing is bullshit.”

A third follow up video features Tunç explaining his side of what he saw at the airport terminal and why he got involved with the visibly upset woman.

“I didn’t really know if she was an actual veteran, I know some of you guys had questions regarding that,” Tunç said. “I just wanted to help her out in case she was having issues with PTSD. So I tried to give her space, tried to just comfort her, listen to her, instead of peer pressure her and mocking her… make the environment a safer place for the workers, her and the passengers that were trying to board the plane safely. I didn’t want to escalate the situation further, even if I didn’t agree with some of the things she said about the mask mandate.”

The Daily Dot has reached out to Tunç and Southwest Airlines about the incident.