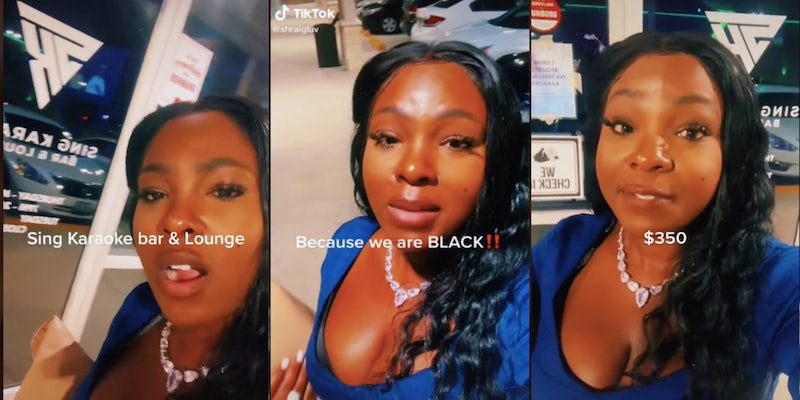 ‘This business needs to be shut down’: TikToker says karaoke bar charged group of Black friends $350 to sit at a table

Other patrons said they weren't charged the fee.

In a TikTok posted on Aug. 28, @shraigluv alleges that a karaoke bar in Texas discriminated against her and her friends because of their race by charging hundreds of dollars for a table.

The video shows Shenise Anderson, a TikToker with nearly 350,000 followers, outside of Sing Karaoke Bar and Lounge in Houston.

“So if you guys are ever in Houston, Texas, do not ever patronize this restaurant, this karaoke spot. Do not ever come, you guys,” Anderson says. “It is ridiculous: Me and my friends because we are Black, we got to pay $350.”

The karaoke bar staff allegedly told Anderson and her party of six people that they had to pay the $350 charge to be seated at a table. The TikToker said she asked another group sitting at a table if they were asked to pay $350 for their table, and the group said no.

Anderson urged her followers to review-bomb the business. “Even if you have not been here, leave them a review,” The TikToker said. “This business needs to be shut down.”

Viewers flocked to the karaoke bar’s Instagram, Google, and Yelp reviews, but the business has since disabled comments on Instagram and reported the influx of fake reviews to Yelp. Negative comments can still be found in the bar’s Google reviews.

“They had rats as big as cats!!!” one person wrote.

“This Place is discriminative to black people,” another added. “You would think racially profiling would be gone in 2021. But nope This restaurant is still at it.”

On Wednesday, Sing Karaoke Bar and Lounge released a statement regarding the incident on its Facebook and Instagram.

“The young lady made a reservation for a large group,” the bar’s statement says. “We charge all large parties no matter race or color a minimum, this minimum can then be applied towards food and drinks. There is no charge to enter our establishment or to sit at the bar area. This can be seen by signs posted inside our establishment.”

The bar also posted the sign allegedly posted to alert customers of the weekend table minimums.

On Thursday, Anderson responded to comments on her TikTok claiming that the company’s policy for large groups was not displayed when she booked a reservation through Google. Anderson also alleges that a manager responded that he “doesn’t care” when she noted that she was popular on TikTok and would leave a review.

“The main reason I put out this video was because I was discriminated against,” Anderson said. “And I didn’t want any Black person or person of color to go to a place and spend money where they don’t value [people of color].”

Neither Anderson nor Sing Karaoke Bar and Lounge immediately responded to the Daily Dot’s request for comment via Instagram message.