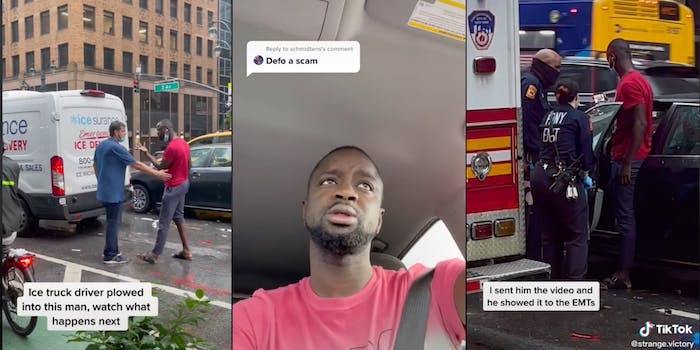 ‘If it was stolen he wouldn’t have gotten out the car’: Ice company claims truck ‘stolen’ after viral TikTok shows alleged hit-and-run (updated)

A viral TikTok showing an alleged hit-and-run by an ice truck driver has since spurred a campaign to help the victim pay for his vehicle damages.

“Ice truck driver plowed into this man, watch what happens next,” the TikTok’s overlay reads.

The video, posted by @strange.victory on July 2, shows the two drivers talking in the middle of Second Avenue in Manhattan next to a truck with the logo “ICEsurance” plastered on it and a damaged dark blue sedan. The driver of the sedan, who is identified as the victim in the crash by the TikToker, walks back to his car to retrieve something when the truck driver appears to takes the opportunity to get in his vehicle and speed away.

The sedan driver jogs after the absconding truck but it gets away, even making it past a parked police car with its lights on.

The TikToker says he sent the video of the incident to the driver so that he could show it to emergency personnel. It then cuts to a later time when the New York City Fire Department and EMTs arrive at the scene and speak with the driver.

“Not the police literally being right there and the van still getting away,” commented @thisgirlxv.

The TikToker gave an update on Wednesday, claiming:

“Insurance refuses to pay bc the ice company claims the van was stolen.”

ICEsurance has operations based in Los Angeles, California, and Mamaroneck, New York. The company has not publicly commented on the situation.

“That guy looked like he had a company shirt on and the company said it was stolen? Lmao if it was stolen he wouldn’t have gotten out the car,” said @babyspice0000.

Another user, @schmidtens, commented, “Defo a scam” in response to the video poster putting the victim’s Cash App information in the comments. The creator responded by posting another video of the driver speaking directly to TikTokers, saying:

“Good morning, guys. People who’re saying that the guy on the TikTok trying to scam people, he not scamming nobody. He’s trying to help me, but he not trying to scam nobody. So this is me, the driver who got hit.”

The Daily Dot reached out to the TikToker and the NYPD for comment.

“The individual in the video is not a current or former employee of Icesurance. The van was stolen while our employee was meeting with a customer. As this is an ongoing investigation, we can provide no further details regarding the incident.”