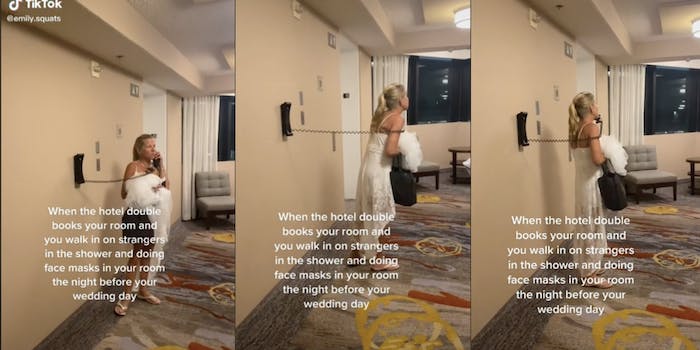 ‘Who talks to others like that?’: Video of TikToker’s mom freaking out over hotel mix-up sparks debate over whether she’s a Karen

'She has every right to be upset.'

A recent TikTok posted by @emily.squats that shows her mother calling the front desk at a hotel sparked debate because of her tone with the hotel workers. Commenters were divided on whether she was a true “Karen.”

“Hi, front desk. Is there a camera? Because I just walked in on some lady in the room that you just gave me a key to,” Emily’s mother says. She directs the bellhop away because “that’s not my room. Don’t go there.”

The video is accompanied by text that says, “When the hotel double books your room and you walk in on strangers in the shower and doing face masks in your room the night  before your wedding.”

Emily’s mother incredulously asks if she’s on camera multiple times. Emily notes in the comments that before the video started, her mother was asking if she was being pranked. “Am I on punked? Is someone pranking me right now?”

Emily sees the video, which has over 400,000 views is seen as light and funny (she knowingly added the Karen hashtag).

The TikToker told the Daily Dot that the situation with the hotel was resolved calmly, and her mother’s new room was free of charge. Emily does say that the other guest also booked for the room reacted more like a “Karen” than her mother.

She said on the other hand, her mom is the “kind of person that if they get her food wrong, she doesn’t even send it back.”

Commenters debated, meanwhile, whether her mom was being rude to the employee on the phone.

“I understand it’s frustrating, but who talks to others like that?” @ladylectric wrote.

Another commenter, @2shae2shae said, “People that call from the lobby phone infuriate me. Come down to the front desk. Your going to need new keys and probably speak to a duty manager!!”

Other commenters were empathetic to the situation.

“I worked in hotels for 10 years this is not okay. She’s not overreacting. She has every right to be upset,” @crose143 said.

“As a front desk manager, this is extremely dangerous and not okay! She has every right to be upset. I hope you were upgraded or comp. a meal/night,” @asleepintherose added.