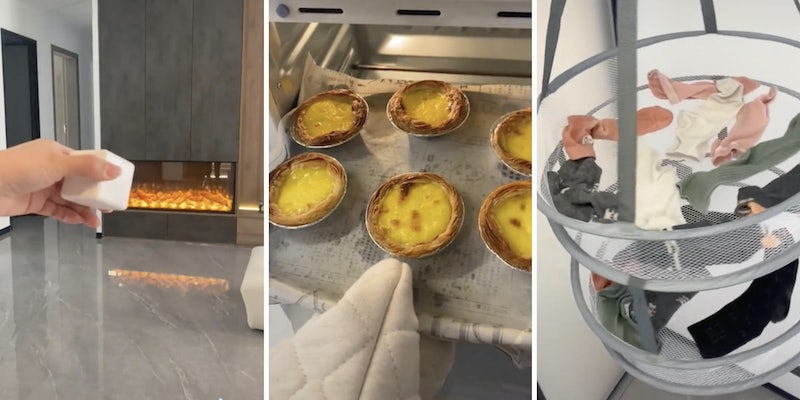 ‘Which Black Mirror episode is this?’: @Homecoming.diary’s entrancing, high-tech TikToks are a mystery

If they're not ads, what are they?

What does a single woman do after she gets home from work? Or from a date? What about after a party? Or after skateboard training?

These are the types of questions that @homecoming.diary, a TikTok account with almost 2 million followers, poses at the beginning of a majority of its videos. What follows is usually a fast-paced, edited sequence of hyper-specific gadgets, inexplicable chores, and the usage of multiple mini washing machines. But the purpose of the videos is unclear. They aren’t explicit advertisements—but they aren’t depicting real life, either. They’re a genre all their own.

In one of @homecoming.diary’s recent TikToks, the video’s inaugural question is “What does a girl with a monthly salary of $100,000 do after work on a Saturday?” The TikTok begins as many of @homecoming.diary do: A woman, who looks to be in her 20s, walks up the stairs to her apartment where it’s snowing—indoors.

Once she enters her home, she puts a capsule and powder in a coffee mug, which blends and brews coffee. She shakes a cube-shaped device and her fireplace ignites. She unfolds a pedicure-style foot bath and turns on its jets, then sips a beverage while her feet soak. She sprays rows of fuzzy slippers with an aerosol, puts her shoes on a shoe warmer set to 45 degrees Celsius, and washes her socks in a mini washing machine that drains into her bathroom sink. That’s all just in the first 30 seconds of the video, which is almost three minutes long.

Highlights from the rest of the video include the woman making mini pies in a toaster oven, squeegeeing her counter with a small tool shaped like a cloud, drying her hands on a shag-style towel with a dragon’s face on it, and using multiple mini garbage cans, each one smaller than the rest.

Although the letters on the buttons of her appliances and the automated voice that’s part of her fireplace aren’t in English, most of the comments on @homecoming.diary’s videos are.

“Why am I so obsessed with these videos,” commented @theselfhelpplanner on the TikTok.

“This is so interesting to watch,” @swisslerr wrote.

Others note the sheer amount of appliances shown.

“You know how you buy things you think you’ll need, but never use them?” @6ixeats wrote. “She uses all of them.”

“If SHEIN was a house,” @kurbsitb__ wrote, likening the woman’s apartment to the online retailer. Another called the apartment “AliExpress CEO’s house.”

Some question elements of the video.

“How is it always snowing in the hallway?” @bupropion.bitch asked, to which @homecoming.diary responded “guess.”

“Which Black Mirror episode is this??” @simply.ramona commented.

“Are you living in 2070,” @fatimasacrylic asked. @homecoming.diary responded saying “haha same as u.”

And many ask where they can buy the products shown in the videos.

The TikTok account’s bio says @homecoming.diary is named “love dream” and explains that the account “[records] the home life after work” and “[shares] the good stuff.” Its first video was posted on Jan. 4.

Many of its videos share motifs: a hallway wherein it snows indoors, a shot of a woman’s toe sticking out of a hole in her sock, washing produce using a fruit and vegetable sterilizer machine, soaking one’s feet in the living room, and using a hoverboard, skateboard, or even miniature vehicle to get around one’s home.

@homecoming.diary doesn’t have any other social media accounts or retail websites linked in its TikTok bio and did not immediately respond to the Daily Dot’s request for comment via TikTok comment.

In addition to the widespread bafflement in response to @homecoming.diary’s videos, some TikTokers think the account’s videos are advertisements for the products shown.

User @ciaraherbert posted a TikTok on Feb. 1 saying she found out that “no one actually lives in those nice Asian apartments with the random gadgets.”

“They’re just ads,” she wrote in the overlay text of her video.

Others have taken that theory to @homecoming.diary’s comments sections.

“Someone told me nobody actually lives in those apartments and they’re just for product promotion use, I cant see it the same no more,” @yourepoor commented.

“I don’t understand how they’re making money from these ads when there aren’t any links,” @dreamlikegia wrote.

But @shopping666, another TikTok account that posts some of the same videos @homecoming.diary, includes a link to products shown in its TikTok bio for sale at That Lil Store. @shopping666 has almost 4 million TikTok followers and posts videos of families using home appliances. The account posted its first video in April 2021.

And That Lil Store does boast some of the products shown on both TikTok pages: an automatic soap dispenser, a mini washing machine, a fruit and vegetable sterilizer, and even an “automatic toothpaste squeezing device.”

That Lil Store says it is located in New York City on its website and directs customers to its Facebook page, which is called That Lil Store. But the page’s about section, says it is Siciry, an “international custom jewelry manufacturer.” The contact information on the Facebook page is connected to WearLuvIt, another jewelry brand. (The Daily Dot has reached out to ThatLilStore, Siciry, and WearLuvIt via email.)

Whether or not the TikTok videos are truly advertisements, the people behind them have certainly cracked the code of making videos that TikTok users want to watch: Every video on both @homecoming.diary and @shopping666 has gone viral.

And maybe the mystery of the videos is what keeps them popular.

“Why do I watch these?!” @jessbiays commented on a recent TikTok from @homecoming.diary. “Why are they so fascinating!?”