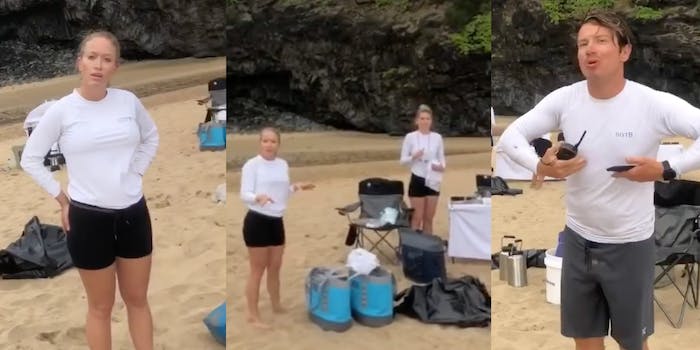 ‘It’s the disrespect for me’: Video shows white tourists setting up barbecue on ‘sacred’ Hawaii beach

A Hawaiian woman confronted the group.

A series of recently surfaced videos show a Hawaiian woman addressing a group of white tourists who are trying to set up a grill on a beach that the woman says is sacred.

Earlier this month, Healani Sonoda-Pale uploaded the videos on Facebook. They show the conversion between the tourists and a woman identified as Megan Wong who confronted them.

In the first video, Wong speaks to a group of white tourists setting up a table, grill, and beach chairs.

As she approaches the group, Wong tells them that what they’re doing is illegal. Meanwhile, a woman from the group asks Wong whether she’s allowed to record the group.

“It’s a public place, I can record,” Wong says. “[Setting up a barbecue] is illegal—this is the reason we don’t appreciate yachts like that coming into our places like that.”

She goes on to say their behavior is disrespectful. One man asks, with his hands on his hips, “How’s it not respectful?”

“Because it’s illegal, this is a state park. You need permits for these kinds of activities,” she responds.

The group starts discussing among themselves, and the man says he would make some calls.

The women of the group argue with her, but their words are not clear.

“We’re trying to figure out,” one woman says.

“I mean, is this how you guys just travel around the world?” Wong retorts. “You just go set up in places?”

“Yeah, we set up places, we give our guests a good time and then we leave,” the man says, shrugging. “That’s how we do it.”

“These are sacred places, you don’t just do this,” Wong responds.

She then turns to the man and asks if they’re going to pack up. He indicates that he refuses to take any action without first making calls. Wong says that she’ll wait for him to make the call.

In a follow-up video, the saga continues. The man says there’s nothing he could do and that if he packed up the arrangement, he “could lose [his] job.” He says he’ll wait for authorities to arrive. A woman from the group asks Wong who she works for.

Wong responds that she lives in the area and runs an organization that protects the environment and community.

“We are the eyes and ears that watch out for things like this,” she says, “I think you guys have had multiple calls from our community.”

The woman walks away halfway into Wong’s sentence. The man says that there is “no GPS” and that “we just gotta carry on.”

“Unless the officials come in, we’re not going to change,” he says. Shortly after, he asks, “What’s the damage that we’re gonna do here?”

“Being here. No one else can do this, it is illegal to have weddings here, set up tables, chairs—all of it is illegal,” Wong says. “But you’re completely disrespecting our rules.”

Another man comes forward and explains that they wouldn’t be setting up the camp if they knew the rules.

“We wouldn’t be told to come here unless we were allowed to be here,” he says. The first man then says that the group has a permit.

“No, there’s no permit. There are no permits to be given for something like this,” Wong explains. “You need a permit to hike in but no activity like this.”

In her Facebook posts, Sonoda-Pale says the tourist group eventually left and agreed to have a meeting later with a local ancestor, “but then backed out and said they couldn’t and left” early in the morning.

Healani Sonoda-Pale did not respond to a request for comment via Facebook. In the comments on her posts, people cheered on Wong’s defense against the tourists.

“I wonder how they would feel if we went to [their] land and just eat up,” wrote one user.

“The hell with your job if it blatantly violates the law and disrespects the area for your rich and entitled clientele,” wrote another user, referring to the man’s excuse that packing up the party would cost him his job.

Some also pointed out the attitude of members in the group.

“Love how she walks away from you when you’re explaining who you are, about your ancestors and the land… it’s the disrespect for me,” wrote one user.

The video also went viral on TikTok where it’s been viewed more than 55,000 times since being posted on Wednesday.

“You wouldn’t be allowed to set up a merch table in the Sistine Chapel,” commented one user on the video. “It’s a public space but it is a SACRED PROTECTED PLACE FIRST.”

“I’m all here for the Karen Reverse card,” another person wrote.