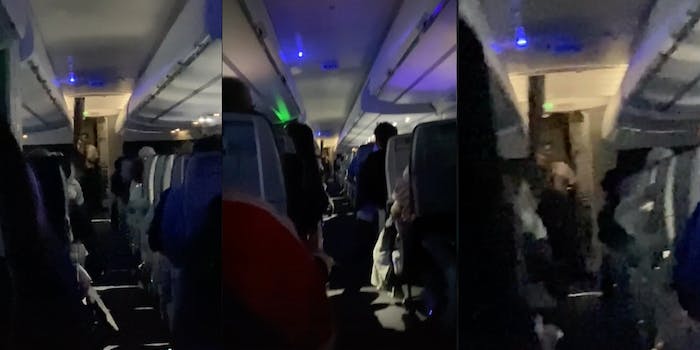 The steward didn't hold back.

A video showing a flight attendant calling out rude passengers who were acting out during a long delay has gone viral, prompting criticism toward some passengers.

A TikTok video shared by Brent Underwood (@brentunderwood) shows an American Airlines flight attendant reacting to another flight attendant allegedly being yelled at and called a gorilla after telling a passenger to put his mask back on. The video has gained over 200,000 likes and 1 million views on the platform.

Masks are required under a federal mandate from the Transportation Security Administration which was extended to Sept. 13, 2021. Violators are subject to a fine, with repeat offenders incurring heftier fines.

“Just like you, we have not eaten also,” the flight attendant told the cabin of passengers in the video. “The fact that we get insulted and mistreated by passengers over things that we cannot control. It is disgusting.”

In follow up videos uploaded by Underwood, who is also the singer for the band 87&Pine, a passenger calls the flight attendant a “drama queen” for trying to enforce the mask mandate. It is unclear if this is the same man who caused the original disturbance.

The flight from Los Angeles, California to Charlotte, North Carolina had been diverted to Raleigh, North Carolina due to severe weather. Passengers waited in the plane on the tarmac for several hours, according to Underwood.

TikTok commenters criticized the man for refusing to wear his mask, as well as overall treatment of flight attendants during this time.

“Hungry or not no one should be treated that way,” TikTok user @melissa_4311 wrote.

Another user was concerned about how the flight attendant may have been treated by their employer, American Airlines, for the actions in this video.

“I’m with the flight attendant but I really hope the airline didn’t discipline him for this,” @vincent.617 wrote.

In a statement to the Daily Dot, American Airlines said that crew works to uphold the federal mask mandate:

“We take the health and safety of our customers seriously, and our crew members work hard to uphold the federal mask mandate that remains in effect on aircraft and in airports.

“We value the trust our customers’ place in our team to care for them throughout their journey, and we expect those who choose to fly with us to treat each other ― and our team members ― with respect.”

Update 5:12pm CT, June 13: In a statement to the Daily Dot, Underwood clarified the events leading up to a second passenger insulting the flight attendant by calling him a “drama queen.”

“There was 1 other man after the initial incident who waited till we we’re finally taxiing to the runway (after being grounded for over 3 hours and after the Captain made the announcement to finish in the lavatories if you were using them so we could take off) to get up and try to use the bathroom,” Underwood wrote. “The lead flight attendant told him to please return to his [seat] which is when the ‘drama queen” comment happened in the video.”

That’s when the flight attendant initiated a return to the gate, Underwood said. Underwood stated his support for the flight crew, who he believes did the right thing by standing up for themselves.

“After having time to really think about the events of that day my opinion couldn’t be more firm,” he said. “I FULLY support the crew and praise the lead attendant for standing up for his staff and what’s right. As a person who works customer service myself I believe it’s high time for a push back! Customer service is no cake walk under normal conditions, but for some reason the pandemic has made some customers think they can quadruple down on their self appointed entitlement! It’s my hope that this video is just the beginning of a ‘movement’ where we in customer service take a stand and demand to be treated with the respect we deserve.”