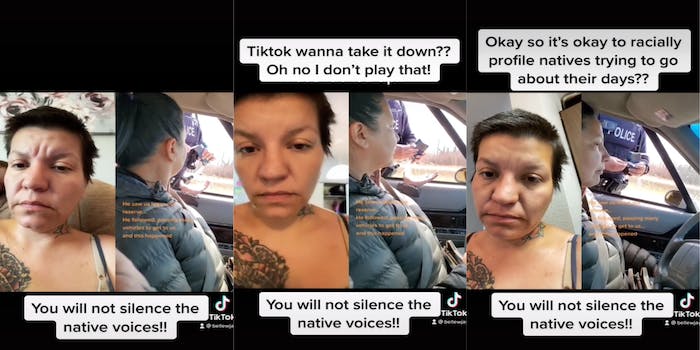 ‘In no way is this OK’: TikTokers blast cop who imposed breathalyzer on First Nations woman leaving reserve

'Are you going to find something else for me to blow?'

A video that shows a police officer pulling over a First Nations woman for an alcohol breathalyzer test as she’s leaving a reserve has sparked criticism of discriminatory policing of Indigenous people.

“He saw us leaving our reserve… He followed, passing many vehicles to get to us and this happened,” the original video, which has been taken down, is captioned.

A stitch of the original video posted by @bellewjay has more than 367,000 views. The duet creator watches with looks of disgust at the officer’s actions. “You will not silence the native voices!!” the overlay text reads.

The passenger in the original video filmed the entire interaction, and the video starts with the driver saying, “For First Nations leaving the reserve, there will be mandatory alcohol screening.”

The driver sighs and then smiles as she says, “I’ll blow,” while the officer holds the breathalyzer for her.

After she tests negative for alcohol in her system, the driver asks if she can leave and ends with a snarky joke. “Or are you going to find something else for me to blow?” she says.

According to a report commissioned by the City of Montreal, Indigenous people were stopped the most by police in Montreal, making up 17.9% of police checks. Indigenous women in particular were 11 times more likely to be stopped by police than white women. In Canada, police don’t need reasonable suspicion that a driver is impaired in order to request a breathalyzer test.

“Based on a false negative stereotype, some health-care providers may inaccurately attribute a presenting health problem to alcohol use and fail to appropriately diagnose and treat the problem,” wrote Dr. Myra Muramoto, the author of a study on drug and alcohol dependence.

People online were upset that Indigenous people were being tested for alcohol while leaving their own land.

“So natives have to test for alcohol to leave their reserve when they [police officers] travel THEIR land?” one user commented.

Others who were outraged also found comfort in the driver’s humor.

“And I was so mad until I got to the end,” one user commented. “Why is she trying to make me laugh.”

The Daily Dot was unable to reach the driver for a request for comment, but she said on TikTok she was grateful for the support she has received.

“Next time… I’ll be politely raunchy,” she wrote.