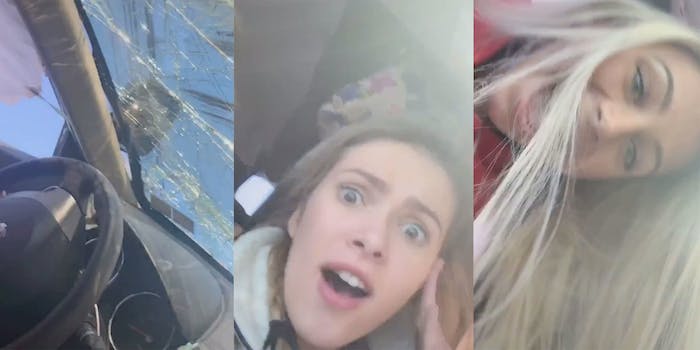 They suffered only minor injuries—and got viral fame.

It’s a TikTok that starts off, like many others, with two teen girls start lip-syncing to a hip-hop song. But then you realize the girls are upside-down, and the cracked windshield indicates something much more jarring: They’re lip-syncing on TikTok in the aftermath of a major car crash.

Katie Cornetti, 16, told the Daily Dot she selected a song—Ashnikko’s “STUPID”—and began recording her and her friend Marissa Bordas as they hung suspended for 20 minutes in Bordas’ totaled car.

Cornetti said that an improperly mounted tire caused the car to crash on Nov. 16 outside of Pittsburgh. The TikTok shows the girls laughing and appearing physically fine, and Cornetti told BuzzFeed News that the only injury she suffered was a small bruise on her lip caused by her phone.

“We were both, by the graces of God, perfectly fine,” Cornetti told the Daily Dot.

Cornetti said she and Bordas, who was driving, had ensured each other’s safety before laughing about the situation. Recording the TikTok allowed for them to cope with humor as they waited for emergency services to arrive, Cornetti said.

“There was not much we could do to make anything better, so that’s what we decided to do,” Cornetti told BuzzFeed News. “Literally the week before I got into a small car accident I was freaking out and crying—that was not the best way to cope with anything.”

But she does understand the absurdity of the video.

“Who takes a TikTok when they are flipped over in a car, stuck?” Cornetti said.

While some on TikTok and Twitter commended the girls for their devotion to TikTok, others saw it as inappropriate.

“They’re way too calm for the situation,” user @lexthelibra commented on Cornetti’s post.

“Imagine being the [firefighter] that sprints up to the flipped car to see… this…” @llamas_.in_.pajamas commented.

Famed YouTuber Zane Hijazi reposted the TikTok on Twitter where it got over a million views.

“These girls got into an accident, flipped their car, and still managed to get a TikTok up,” Zane tweeted.

These girls got into an accident, flipped their car, and still managed to get a TikTok up pic.twitter.com/MPxnOFgBhW

Cornetti and two of her friends made another TikTok post to explain the accident in a “storytime” video. The girls said they were on their way to get smoothies when the tire caused the car to flip while Bordas was making a turn.

“The car basically just like flipped twice, went through a fence,” Cornetti said. “And just so you know, we were not even on our phones. Even I, who was the passenger—[we] were not on our phones.”

In the “storytime” video, the girls sit in a parked car as they address the internet’s comments.

“And if anyone was wondering, Daddy’s money is not paying for my fucking car,” Bordas says. “It’s my money, thank you very much.”