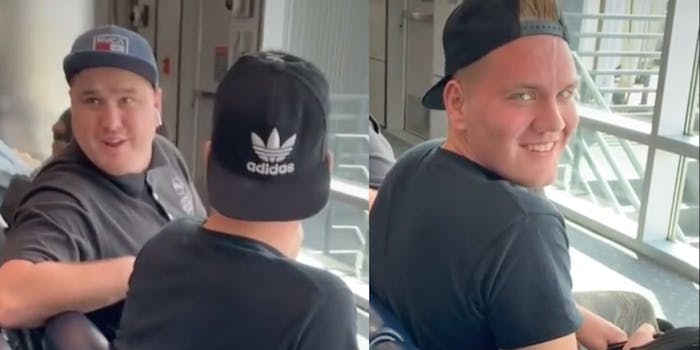 'He’s only acting like that cause he’s got his buddies next to him.'

A viral TikTok video shows two white men ridiculing and making racist comments toward a woman who says she offered them face masks at an airport.

The video was posted by TikTok user Katalina Honey on Tuesday and has since been viewed almost 22,000 times.

“Offered to give them mask and they responded with racism calling us beanbags and to go back to our country,” Honey wrote in the description of the video.

It begins with the two men sitting in the waiting area at Denver International Airport in Colorado. One of them is turned from his seat and speaking with Honey’s companion.

“Everybody else is fine,” he says, looking around, seemingly to show that others were without masks as well.

“People around here,” he says, still scanning for unmasked people.

He stares at her for a few seconds in amusement and then laughs.

“Woo, get outta here bean bag,” he says, still laughing and looking at his partner who also starts laughing with his back to the camera.

“You’re disgusting,” the woman says as the man continues to smile.

“And you’re going to Mexico,” she says.

She asks him where he is going, and he says it’s “none of [her] problem.”

At this point, his companion turns around and laughs at the camera.

“Show your face,” Honey says from behind the camera, “because people will find you.”

As the women walk away, he says, “The only person who is gonna find you is Joe Biden.”

According to a comment from Honey, the men said they were from Texas.

The video has received thousands of comments, with many noting that he was likely behaving in such a bullying manner because he had his friend to egg him on—and because the victims were women.

“How he looked at his friend after saying it for approval,” one user commented.

“He’s only acting like that cause he’s got his buddies next to him,” wrote another. “You would’ve seen a whole different reaction without them next to him.”

Honey did not immediately respond to the Daily Dot’s request for comments. In a comment on her video on Wednesday afternoon, she wrote that she spoke with three Frontier Airlines representatives, but they “did nothing.”

One commenter made a reference to the airlines’ recent removal of an Orthodox Jewish family from a flight because a toddler wasn’t wearing a mask.

“They kick out families because their 2y/o won’t leave their mask on but they let these guys chill with no mask,” wrote one user.

The Daily Dot has reached out to Frontier Airlines.