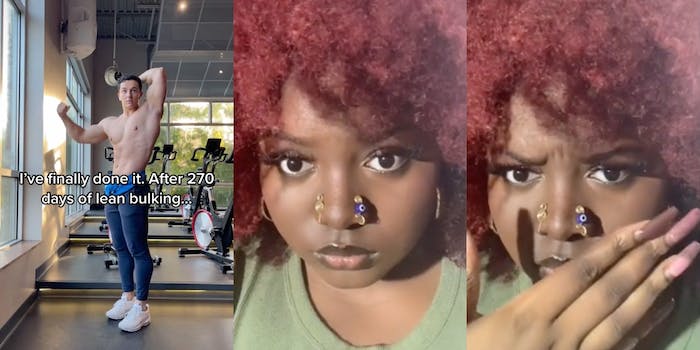 'Moderation is for cowards.'

One TikToker’s viral workout achievement has renewed the eating disorder discourse on the platform.

The TikToker, @johnnybiggio or Johnny, shared his weight (and muscle) gain journey, saying, “Unbelievable how far we’ve come.” He boasts more than 128,000 followers.

After 270 days of lean bulking and weighing out six meals per day, Johnny bulked up to a weight of 200 pounds. Although other bulking viewers applauded the gains, not all viewers supported his achievement.

According to Healthline, “lean bulking” is when you “tightly regulate your calorie surplus in an effort to prevent excessive fat gain. The diet is mainly comprised of minimally processed whole foods.”

Several viewers weighed in, saying the behavior was clearly an eating disorder.

He denies those claims, posting a follow-up TikTok on Thursday afternoon refuting them.

“I’ve had an eating disorder in the past. How is it an eating disorder if I’m happy eating like this?” he posits. “When have you ever heard anyone that’s successful at anything… tell you to do something in moderation, to live inside your comfort zone.”

He continues: “Moderation is for cowards. You guys say ‘obsessive’ like it’s bad.”

One viewer, known as @zioraaaa or Ziora on TikTok, dueted Johnny’s video, saying, “So y’all telling me this ISN’T an eating disorder?” Her facial expressions showed that she clearly wasn’t buying it.

According to her TikTok’s caption, Ziora is in recovery from her own eating disorder and can tell one when she sees it.

Ziora’s viewers echoed similar viewpoints, agreeing that Johnny must have an eating disorder.

“Muscle dysphoria is a recognized disorder, [affects] men more than women,” one user commented. “Hope some of these men are okay. It’s not healthy at all.”

Although it’s unclear whether Johnny has a diagnosed disorder, the viewer was correct that body dysphoria, or dysmorphia, is a real condition. According to the National Library of Medicine, muscle dysmorphia is a form of obsessive-compulsive disorder that is subcategorized as body dysmorphic disorder. The compulsion is to achieve the desired levels of muscularity and leanness.

“Down to the decimal. It is 100% an [eating disorder], but people will deny it because he’s ‘happy’ and ‘healthy,’” one viewer commented, agreeing that the TikTok showed signs of an eating disorder.

As they predicted, other viewers came to Johnny’s defense, saying that working out doesn’t equate to a disorder.

“This is actually someone who has their eating-in-order,” one defender commented.

Other viewers got snippy, with one saying, “It’s commitment and dedication but you wouldn’t know anything about that I guess.”

Neither users @ziorra nor @johnnybiggio did not respond to the Daily Dot’s requests for comment.