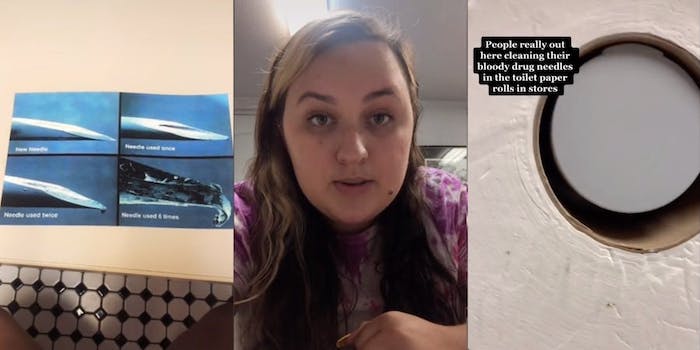 'The video is demonizing people with addiction.'

A person on TikTok claimed people were cleaning bloody “drug needles” with the toilet paper rolls in public restrooms, but a harm reduction advocate was quick to debunk the theory.

The advocate stitched the original TikTok from the @harmreductionservices account, emphatically saying, “No, they’re not.”

Harm Reduction Services is an organization that distributes 2.5 million sterile syringes per year, according to the advocate.

In the TikTok, she showed a chart of what needles look like after being used. With each consecutive use, they become more and more dull, which makes them painful and unsafe to use.

“Nobody is going to try to clean needles by sticking them in something solid,” the advocate explained. “If someone is cleaning needles to reuse them, 1) they’re going to do it with a liquid like a bleach solution so it doesn’t dull the tip, and 2) that means we failed them as a society that they’re in a place they have to do that.”

The advocate went on to say that the original TikTok she stitched had reached over five million views and 10,000 comments saying things like, “I guess I’ll never use toilet paper or even go outside again.” Such commentary perpetuates the idea that drug users are scary and others are allowed to treat them badly, she said.

The original TikTok has since been taken down. In contrast to the original video’s massive virality, the advocate’s TikTok has attracted significantly less attention at a little over 98,000 views. But judging by the comments on the TikTok, viewers agreed with the advocate.

“People rly trying to find anything to demonize addicts,” one viewer commented.

“YES!!” another user wrote. “The video is demonizing people with addiction. I even saw a Facebook one that said they were doing this to ‘purposefully infect’ people.”

Other viewers pointed out that on the off chance drug users were going to use toilet paper to clean needles, they wouldn’t do it in a public space nor would they just stick a needle in the folds of the paper.

“Why would you do that if you could just… take off a lil piece and wipe it off instead? It literally doesn’t make any sense,” one viewer said.

Another commented, “No one is going to open the storage container of TP in a public restroom and stick a needle in the roll like that. Like it physically doesn’t add up.”

Someone else said, “also it makes literally no sense, if you were going to use toilet paper to clean a needle you would just tear a piece off and wipe it??? It would do.”

Update 11:12 pm CT Aug. 31: In a statement to the Daily Dot, a representative from Harm Reduction Services said:

“Myths about people who use drugs gain traction because many people already see drug users as disposable. Through policy, media, and popular belief, drug users are painted as scary, dangerous, and uncaring about themselves and those around them. This couldn’t be further from the truth. People who use drugs are dynamic people and valuable community members. They deserve care and respect.”