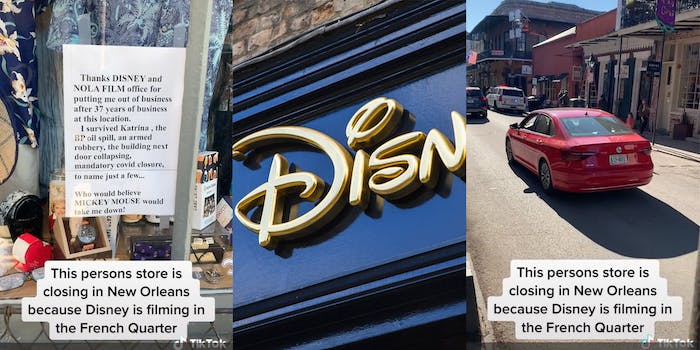 ‘Thanks Disney for putting me out of business’: Shop owner says they closed because film crew shut down New Orleans neighborhood in viral TikTok

In a viral TikTok, @michaelmanzella37 showed a storefront with a sign stating that the shop would be closing after 37 years of business due to filming in the French Quarter of New Orleans.

The sign states, “Thanks Disney and NOLA Film Office for putting me out of business after 37 years at this location.” The sign continues, “I survived Katrina, the BP [Deepwater Horizon] oil spill, the building next door collapsing, mandatory COVID closure, to name just a few… Who would believe Mickey Mouse would take me down?”

During the recording, a person behind the camera reads the sign out loud. Then, someone faintly says “fuck Mickey” in the background. It’s unclear who made the statement.

By Thursday, the video had more than 118,000 views. Despite what the note said, people weren’t buying the story.

One user commented, “When film companies film in areas with stores or restaurants they normally pay them anywhere from $4,000 to $10,000 a day so that owner is lying.”

Another user said, “That’s total BS [bullshit]. Disney compensates businesses to close for the time they are filming. Seems like this shop was already going downhill for a while.”

On the other hand, some felt that this might have been the best move if the store wasn’t receiving much business.

One user stated, “Sounds like they weren’t making money.”

Another user commented, “Judging by the clothes in the window, it’s not Mickey’s fault.”

In the video, there are several items such as reading glasses, a watch, and a few pieces of clothing including a straw hat and some shirts that one might consider outdated.

According to Nola.com, Disney is scheduled to film this year in New Orleans for a reboot of the horror-comedy film The Haunted Mansion, which debuted in 2003 and starred Eddie Murphy.

The new movie, with the working title, Joyride, was set to start filming Jan. 27.

The Daily Dot reached out to the TikToker via comment on the video, the Disney Film Studio via email, and the New Orleans Louisiana Film Office via email.