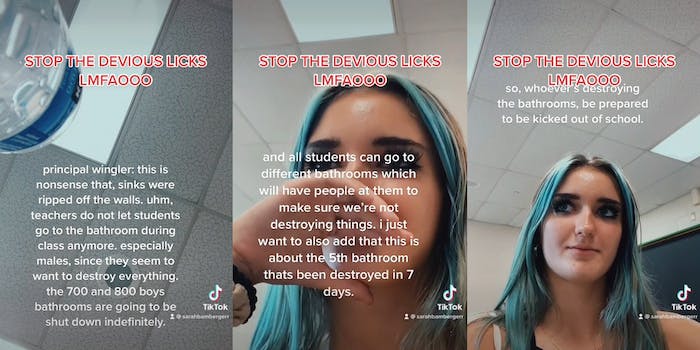 In TikToks posted on Wednesday, principals from two different schools reprimand high school students for ripping sinks off of walls and otherwise damaging school bathrooms. The videos are the result of TikTok’s “devious licks” trend, which centers around damaging or stealing from school property and uploading a video of the act.

In a video from @sarahbambergerr, a high school principal tells students over the school’s loudspeaker that students will no longer be able to go to the bathroom during class because of the damage that’s been done to the school’s facilities. He also informs students that two of the school’s bathrooms will be “shut down indefinitely.”

“All students can go to different bathrooms which will have people at them to make sure we’re not destroying things,” the principal says in the video. He adds that five bathrooms have been “destroyed” over the course of a week and threatens the culprits with expulsion.

A principal from another school takes a less modulated tone with students in a TikTok from @fun.jokez.

“We do not have the resources to call each of your parents and tell them what you’re doing,” the principal says over the loudspeaker. “So, from now on, we will be removing the hinges from the doors on the bathrooms.”

“This is completely unacceptable, and this is the only recourse we have,” the principal continues.

Both @fun.jokez and @sarahbambergerr posted follow-up videos. User @fun.jokez revealed that students are getting in trouble for recording announcements from their principal in addition to damaging bathrooms in a video posted on Thursday.

Another TikTok posted the same day captures the principal telling students that their school will be going completely online. “I am for sure getting expelled,” the overlay text says.

In @sarahbambergerr’s follow-up video, her school’s principal tells students that they will no longer be able to carry around backpacks to class or during their lunch period.

“Somebody made a pepper spray bomb,” @sarahbambergerr captioned the video. “Kids are getting escorted in cuffs, and shooting threats now?”

According to @xanman1, a Twitter user who said that devious licks happened at their school, the trend began as students stealing school supplies.

“But then it escalated to toilets, bathroom doors, etc.,” @xanman1 told the Daily Dot. “I didn’t think much of it, thought it was just a joke. But it started happening to my school and many bathrooms and classrooms with valuable items were closed down.” The TikToker also said that a Smart Board was stolen from their school.

The “devious licks” trend has folks on Twitter talking, too.

Some users have even posted footage of devious licks on Twitter. In a video from @dynamic1x, students are seen taking a bathroom sink off the wall. @dynamic1x declined to tell the Daily Dot whether or not the video was their own.

Many have made memes of the trend, too. The memes highlight the aftermath of the destruction of devious licks and the concept that devious licks are different than crimes like larceny and vandalism.

“Your honor my client did not commit grand larceny he just got an absolute devious lick,” says one meme accompanied by a court photo.

@fun.jokez and @sarahbambergerr did not immediately respond to the Daily Dot’s request for comment.