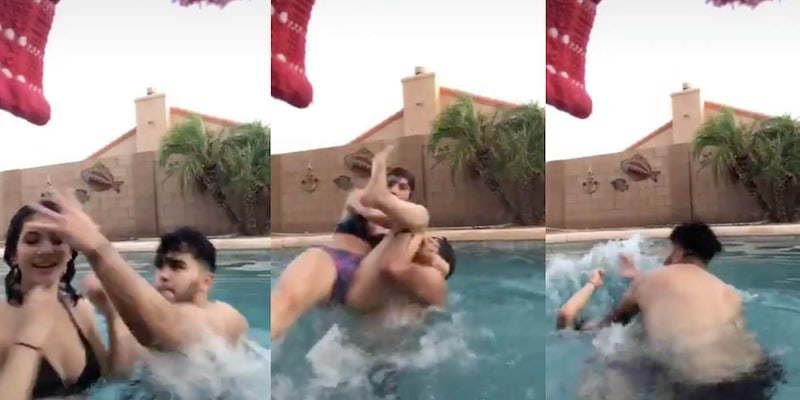 The video shows her boyfriend repeatedly dunking her head underwater as part of a TikTok challenge.

A video has gone viral after viewers shared concerns that what was being portrayed as goofing off may be indicative of something more violent.

Maya, who goes by the name @babyydelgado on TikTok, posted a video last week in which she and her boyfriend nonverbally responded to a series of relationship questions by dunking the other person underwater.

It’s a cute game in theory, but the force her boyfriend repeatedly uses to one-up her raised a red flag for a number of people watching the interaction.

“I’d watch this guy [for real], doesn’t seem like he’s playing to me,” wrote @KristoDIVG. “Dude is low key going full force and also not smiling at all.”

While an extraordinary number of people expressed alarm over the footage, some didn’t see any problem, instead reading their interactions as playful and even #relationshipgoals.

“She looks pretty happy to me,” one user countered.

Maya herself jumped online to defend her relationship, saying that they have been together for four years and he’s “never hurt a hair on [her] head in an angry manner.”

She also responded to similar concerns being expressed on TikTok.

“Y’all are so soft he was helping me get up with his other arm and I was obviously ok if I was laughing the whole time,” she wrote, adding in another response, “The worst injury I got from this is water in my ear… I was having fun or I would’ve told him to stop.”

While no one can know what goes on behind closed doors in someone else’s relationship, the video still sparked an important conversation about how even interactions that may not clearly read as violence can be a result of underlying toxicity and eventually escalate.