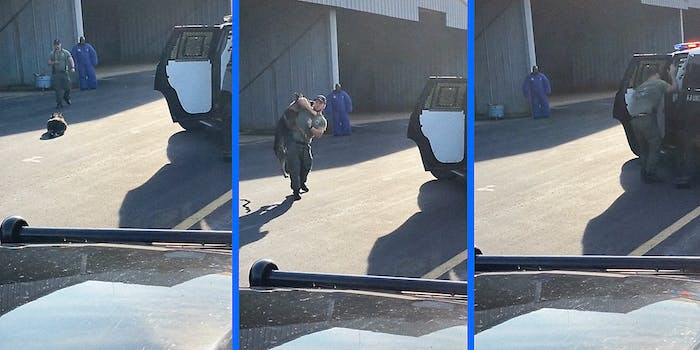 The Salisbury police is conducting an investigation.

A TikTok video trending on Reddit shows a North Carolina police officer abusing a police K-9. Per ABC affiliate WSOC, an internal investigation is underway following a tipster release of a video exposing the officer slamming the police dog inside the vehicle.

The shocking video, posted on TikTok by Stella (@toberlinni), shows a Salisbury police officer putting a collar on a 4-year-old K-9 named Zuul after the dog jumps out of the car. He then heaved the dog off the ground by the collar and over his shoulder toward the vehicle. After he struggles to get Zuul into the vehicle, the frustrated officer punches him.

Another unseen officer, from the car facing the abusive officer, says: “We’re OK, no witnesses.” However, it’s unclear if he knew his dashcam was recording the event. His colleague chuckles at the comment; however, it’s likely someone from law enforcement shared the video to a non-police party or outlet. It isn’t immediately clear when the video took place.

“Is your camera on?” a second off-camera officer asks.

“Ah, no, my power’s off,” the officer replies, though the cam is recording.

Per the New York Times, Chief Jerry Stokes said that the K-9s are trained to be used against criminals, and officers require complete control.

“When a canine is noncompliant with the handler’s commands, the handler is trained to correct the dog,” he said in a news conference. “Canine training tactics and corrective measures can sometimes be alarming out of context. S.P.D. cannot and will not comment about whether the training tactics used in the video were appropriate because that is still being reviewed.”

Stokes did not take additional questions about the incident or the investigation.

Small protests have started in front of the Salisbury Police department station this week.

PETA subsequently released a statement this week calling for the officer to be “permanently reassigned to another division, barred from interaction with K9s or animals, and prosecuted for cruelty to animals.”