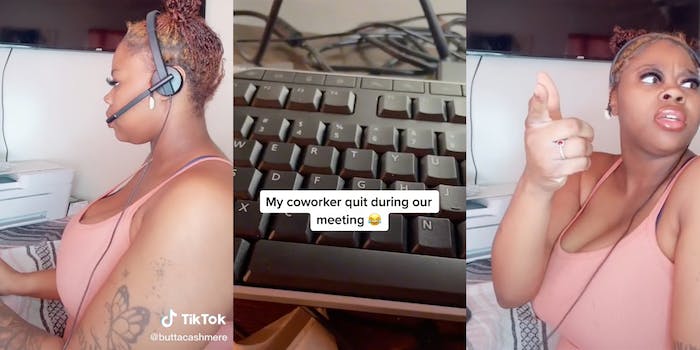 ‘I do feel sorry for you guys who are stuck here’: TikToker says co-worker quit during Zoom meeting

'This is me telling you guys that I am leaving the company.'

Employees are done putting up with toxic human resources departments, and one TikToker’s viral video proves it.

TikTok user @buttacashmere captured the moment their co-worker announced that they would be quitting during a Zoom meeting. The video was uploaded on Sunday and had acquired 2.3 million views on TikTok by Monday.

In the video, @buttacashmere’s coworker says, “I don’t know how y’all are going to take this. Quite honestly, I do not care. This is me telling you guys that I am leaving the company.”

“I do have another job already lined up, so I do feel sorry for you guys who are still stuck here,” the co-worker says before leaving the meeting.

Several commenters applauded the former employee’s courage in standing up for themselves, nodding to the greater trend of employees severing ties with toxic workplaces that’s been dubbed “the great resignation.”

“The great resignation is real. It’s time we show that we will not put up with toxic management. Good for her!!,” viewer @wiscowoman wrote.

“They don’t care. Corporate never cares. Always do what’s best for you,” another viewer said.

Another commenter added, “As someone in HR, I support this 100%. A taste of their own medicine.”

Comments on the video have since been turned off by @buttacashmere. While the TikTok account is associated with the company Cashmere All Ova Butta, the company confirmed via e-mail that it’s not the company mentioned by the co-worker in the video.