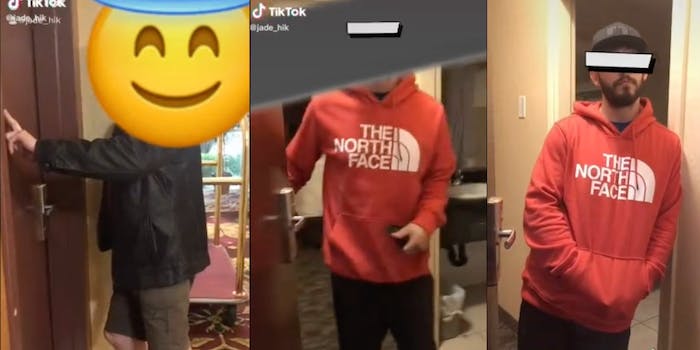 'As a father, I would do anything to protect my kids.'

TikTok commenters claimed a woman’s dad as their own after she posted a Jan. 7 video of him confronting her “cheating” ex-boyfriend, the Daily Mirror first reported.

Jade Hik, 24, posted a video of the “loyalty test” she and a “friend’s friend” set up to determine if her boyfriend was cheating as she suspected. Hik says that her boyfriend at the time spoke with a woman, “Hayley,” for two weeks before making plans to book a hotel room and meet.

Hik says she and her father, Dave, confronted her then-boyfriend, and she “broke up with him on the spot.”

The TikTok, on which the platform disabled sound, shows Hik and her father approaching the hotel room and telling her ex-boyfriend not to come back to her house.

In the version Hik uploaded to YouTube, Dave covers the peephole on the door as he knocks. Hik’s then-boyfriend opens the door, and Hik says, “Sup, motherfucker.” Her father says, “I’m Hayley.”

Dave says, “I’ve got a few things to say to you right now,” to which Hik’s ex-boyfriend responds, “OK.” He continues, “You do not go back to that house ever, you understand?” Hik’s ex-boyfriend, whose face is digitally covered, nods his head. Dave says he “better have an appointment” if he wants to come to Hik’s house.

“Tonight, you’ll be jerking off, just so you know,” Dave says. “There is no Hayley.” Hik says, “Hayley is my friend.” Dave says, “You fucked up, dickhead” before walking away with his daughter.

In another video, she says that she and her ex-boyfriend dated for “almost two years” and that they lived together, had a dog together, and had a “toxic” relationship for months. She says because his phone was under her name, she knew he was texting his previous ex-girlfriend.

After the two approached Hik’s ex-boyfriend, Hik and Dave went to dinner and had “celebratory” drinks and shots. She says she “went on” with her life and that her ex-boyfriend’s mother and older brothers retrieved her ex-boyfriend’s belongings from her house. Near the end of the video, Hik shows her dog in response to questions asking who took the couple’s dog.

Commenters commended Hik’s father for his part in the video, claiming him as their “tik tok dad” and calling him a “gem of a man.” In another TikTok, she introduces Dave and gives him a hug from the viewers.

“I just want to say thanks to everybody for all the kind words,” Dave says. “And I just want to let you know that, as a father, I would do anything to protect my kids.” As he finishes speaking, he brings an oversized, foam fist into the camera’s view.

In an Instagram message to the Daily Dot, Hik said she has “moved on” from the relationship.

“Life hasn’t changed a whole lot,” Hik wrote. “I’ve had tons of support from all around the world which is absolutely crazy to me. I’ve also had a fair amount of backlash and hate which I expected would happen.” She said her father is “the most supportive man” in her life.

The video has recieved over 660,000 views and over 100,000 likes from viewers who commented how much they “love” Hik’s father. One commenter wrote that Dave “was being way more respectful and nice than he could have been.”

“My dad would’ve dragged that boys body across the floor respect to urs cus he’s so calm,” a commenter wrote. “But I know he was angry inside.”