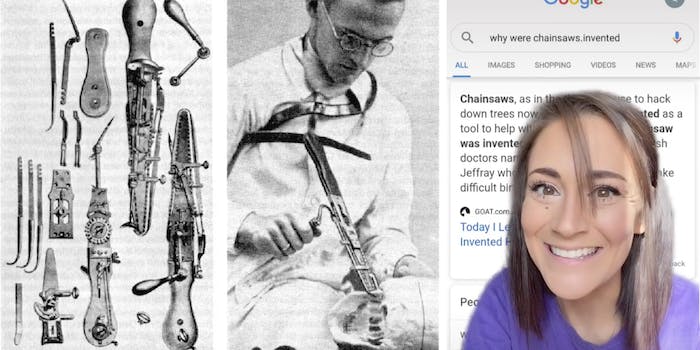 Why the history of chainsaws is the newest TikTok challenge

People on TikTok just learned that chainsaws (the power tools used to hack down trees) were invented for childbirth—and they’re freaking out.

Two Scottish doctors, John Aitken and James Jeffray, pioneered an early prototype of today’s chainsaw in the late 1700s, according to the National Library of Medicine. The saw was used for symphysiotomy, a surgical procedure in which pubic cartilage is divided to widen the pelvis during childbirth.

TikTok user @sunflowl said women today can be glad they weren’t born in the 1700s.

The hand saw was a fine, serrated link chain cut on the concave side. The idea was that it would allow a smaller wound and protect the mother’s nerves and blood vessels during childbirth.

Although designed for medical use, the process has too many complications for modern obstetricians. Nevertheless, the saw caught on and became more widely accepted, especially after the invention of anesthetics. Mechanized versions of the chainsaw were developed later in the 1800s.

Many TikTok users were aghast to learn this power tool trivia, and in true TikTok fashion, they made a challenge out of it. Users are now recording themselves before and after Googling what chainsaws were really invented for.

User @fixsenstrip voiced what so many people are thinking: “That’s so fucked up.”